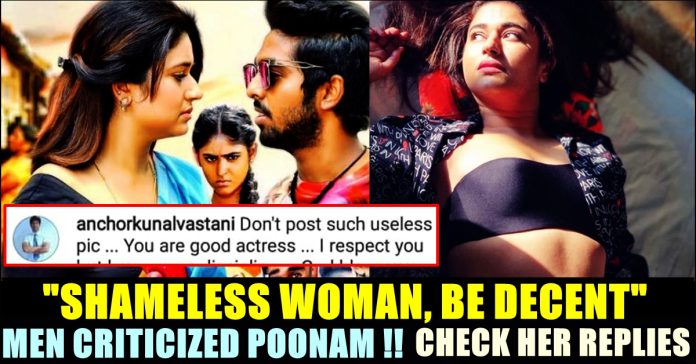 Netizens criticizing female celebrities for their attire in social media is not something new in this digital era. Celebrities choosing social media to interact with their fans and followers instead of meeting them in person has became common nowadays. One trouble celebrities facing in online, while interacting with their followers is, that there is more possibilities for them to receive abusive comments from them for no proper reasons often. However few celebrities would ignore them without minding it but few wouldn’t avoid them just like that. Instead they would give the abusers right back what they deserve.

Now actress Poonam Bajwa who is known among Tamil audience for acting in films like “Thenavattu”, “Kuppathu Raja” has replied to her followers who abused for her attire in one of her Instagram posts. Being one of the many active female celebrities, Poonam likes to keeps her Instagram timeline busy. From posting her pictures to replying her followers, she loves to keep her account active it seems. Having more than 15 lakh followers in Instagram, Poonam Bajwa would receive various kind of comments from her fans. Now in her recent post, followers criticized the actress to which she made effort to reply.

In her special Valentines day post, Poonam Bajwa was seen laying on bed by wearing a black brassiere with a shirt over it. She uploaded the post with a caption saying “ Let’s flip a coin.. Heads I am Yours.. Tails You are Mine …” read the caption of her post.

Let's flip a coin.. Heads I am Yours Tails You are Mine … #loveeverymoment#loveeverafter#happyvalentines 🖤🖤@hairstylebynisha

Poonam who only saw the comment in a positive way, replied to the comment of the user by writing “Thanks for the Respect! Bless you double!”

She further replied to few other fans who commented on her post. Check out them below :

Previous articleTrisha Reacts On The Growth Of Sivakarthikeyan !! WATCH
Next articleAtlee Once Again Became A Victim Of Mindless Trolls !!

Vignesh, a 29 year old IT employee committed suicide for unknown reasons in Kovilpatti. He who graduated in Engineering was working in a software...