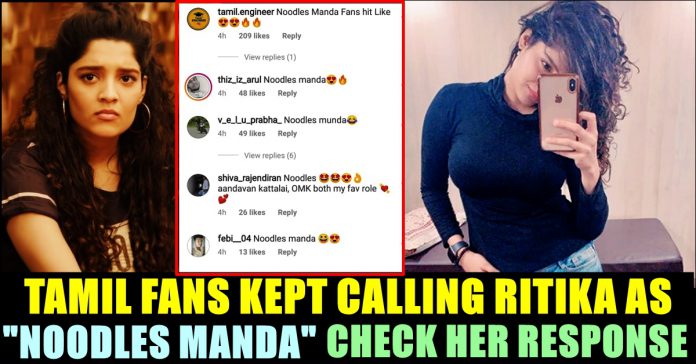 Actress Ritika Singh reacted to the enormous number of comments from her followers who called her as “Noodles Manda”. Ritika Singh one of the active celebrity who did films like Iruthi Chuttru, Aandavan Kattalai and Shivalinga won the hearts of Tamil audience again through her recent release “Oh My Kadavule”. Throughout the film she is called as “Noodles Manda” by Ashok Selvan who played the male lead.

Celebrities all over the world are very much active in social media platforms to let their fans know about the updates of their daily routines. Now, for a post Ritika posted in Instagram, the actress received enormous number of comments calling her as Noodles Manda. For such comments, Ritika reacted in a lovely way by posting the screen recordings and screenshot of it in her Instagram story.

In her first story Ritika wrote “Omg these comments” with “Oh My Kadavule” hashtag. Check out the screenshot of her reaction here :

One of her follower said that Noodles Manda is spreading faster than Coronavirus to which she reacted by posting the screenshot of it by adding laughing emojis. Here’s the screenshot :

In her next story, Ritika even requested her followers not to make her cry. “Anu is just a name, Noodles Manda is an emotion” the meme read.

In one of an old video, Ritika asked one of her follower to call her as “Noodles Manda” who called her as “2 minutes Maggi”. “This is not Maggi, this is my hair” she said to him.

Ritika Singh impressed audience in big time through her “Oh My Kadavule” in which she player the character of “Anu”. The romantic comedy film became one of the very few blockbusters of this year. Ritika Singh has been winning the hearts of audience for the scripts she selects. For her performance in Irudhi Suttru, Ritika won the a Special Mention at the 63rd National Film Awards, and became the first actress, who did not dub for her role, to be recognised at the National Awards.

Being a trained kickboxer and mixed martial artist, Ritika Singh was approached by director Sudha Kongara who saw her in the Super Fight League. Comment your views on this lovely reaction of Ritika towards her Tamil fans.

Previous articleChinmayi’s Husband’s Reply To Singer Srinivas !!
Next articleRiythvika Responded To A Guy Who Criticized Her Looks !!

Remember Abarnathi, One Of The 5 Finalists In “Enga Veetu Mappillai” ?? Check How She Wished Arya On His Birthday !!

Enga Veetu Mapillai is one of the recent sensational show in TamilNadu. The show featured in Color’s TV is a reality show in which...

A massive announcement on the sequel of Selvaraghavan's epic historical drama "Aayirathil Oruvan" surfaced on the special day of New year. As the film...