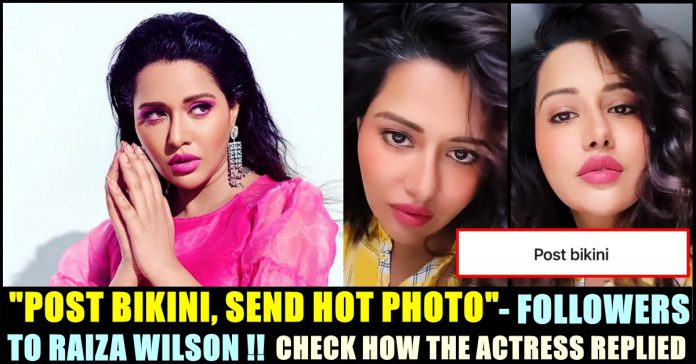 Actress Raiza of “Pyar Prema Kadhal” fame conducted a chat session with her Instagram followers during the night time of Tuesday. She who is know for interacting with her followers quite comfortably, replied to questions on when will she get married, with whom she would like to swap her life, what will happen for someone kidnap her cat etc. A user went on to ask the actress to show her “very hot photo” and another one had the courage to ask the actress her “bikini” picture. Raiza replied to them too and you are going to see how she did it.

After participating in the first ever season of Tamil Bigg Boss show, Raiza gained widespread fame among the audience of Tamil cinema. Having 1.5 million followers for her Instagram space, Raiza is pretty much active uploading posts from her photo shoots. She is also involved in interacting with her followers every now and then.

On the Tuesday session, a follower asked Raiza when she is going to get married. “So many people are asking me question, why? You people find me a nice guy and I will get married tomorrow” Raiza said in her video.

When a follower asked Raiza whom she would like to swap her life with, the actress said that shew ants to live the life of Bollywood actress Priyanka Chopra.

Here’s how the actress said when a follower asked what she would do if he kidnap her cat.

One of her one and half million followers asked the actress to upload her hot picture and she did reply with a picture of herself but by making a weird face.

She also replied to a follower who asked her to post “bikini” picture.

Rakhul Preet Singh Thrashed A Follower Who Abused Her Very Badly For Not Wearing Pant !!

Internet is a place where celebrities facing trolls and abuses from the common users in a daily basis and twitter is a medium which...

Emerging Tamil Heroine Priya Bhavani Shankar, in a recent promotional interview for her recently released "Hostel" film, opened on why she replied to a...