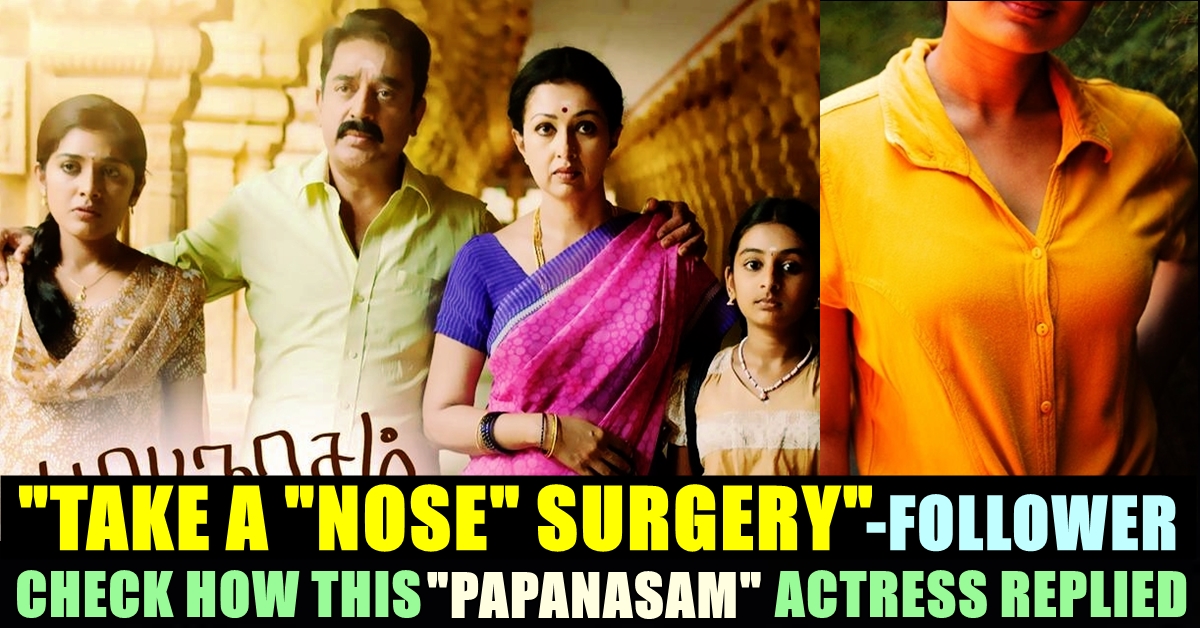 Female cinema celebrities facing mean criticisms about their appearance in social media is common in this digital era and the way there are handling those miscreants often grabbed headlines. Right from Hollywood’s Emma Stone to Kollywood Riythvika, heroines are subjected to face criticism regarding their outer looks. Now, Malayalam based actress Esther Anil who is known among Tamil film audience for her role in Papanasam (2015), replied to one of her followers who asked her to go through a “Nose” surgery and heaped praise from her other followers for her sensible reply.

After acting in the original version “Drishyam” as Malayalam Superstar Mohan Lal’s daughter, Esther reprised her role in the Tamil version and got the opportunity to play the role of Ulaganayagan Kamal Haasan’s younger daughter. Her acting in the film was highly praised by critics and she went on to do lead roles in Malayalam film industry.

Esther is also very much active in social media platforms with 5 lakh plus followers. Similar to other actresses, Esther is also keeping herself engaged amidst lockdown by uploading pictures in her photo posting social media app.

Check out some of her recent posts here :

In one of her recent posts, one of her 5 lakh followers named as Lokesh asked her to take a “nose” surgery. “Take a surgery on nose” read his comment which grabbed the attention of the 18 year old actress.

Unlike other heroines who would have thrashed this follower for his lame suggestion, the young actress held her nerves and said that she loves her nose, in a way of denoting that she would never involve in such act. “Haha. Why? I love my nose.” reply of Esther read.

This reply from Esther impressed her other followers :

Esther played heroine in the unreleased Tamil film named as Kuzhali. She is set to play the lead role in Johar, a Malayalam film featuring debutantes. Celebrities going through surgeries to make themselves look appealing on big screen is common globalwide. But the way Esther refused it and embraced the natural features of her is something that should be learned by many senior heroines who ruined their face with several surgeries.

Sanjeev Shared How His Friend Vijay Tried Contacting Him Despite Of COVID 19 Fear !!
“I Don’t Like You For Your Over-Acting In Super Singer” – Follower !! Nakkhul Replies