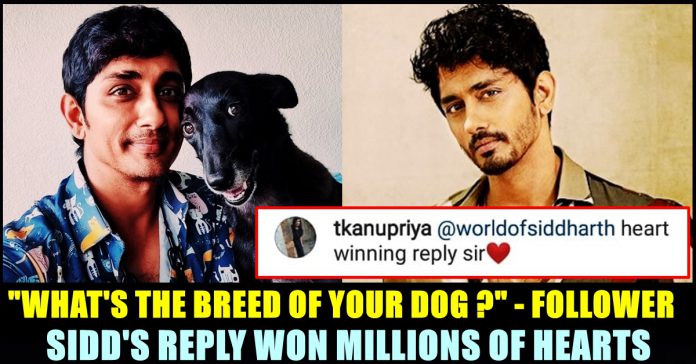 Known for his progressive thought process and the quality film he makes, Pan Indian actor Siddharth is also making a meaningful presence in social media platforms. Be it Twitter which lets people opine their views on public issues/events or Instagram that is widely being used to upload photos and videos, the actor never shied away to express his ideology which is nothing but everyone is equal. A recent reply he made to one of his Instagram followers who asked him to tell the breed of his dog, once again proved that he believes in “equality”. Many impressed with the gesture of the actor which is evident through their comments.

Siddharth is pretty much interactive with his followers in the micro blogging social media site and the photo/video posting app in which he enjoys 46 lakh and 5 lakh followers respectively. Siddharth who debuted to film industry through Shankar’s “Boys”, made his face recognized across the country through his works. Predominantly working in Tamil films, Siddharth’s on screen appearances in Telugu film industry speaks volumes as well. The actor’s performance in Aamir Khan’s Bollywood film “Rang De Basanti” gained him national recognition and the actor went on to work in several other Hindi and Telugu films.

On Wednesday, he uploaded a picture in his official Instagram account in which we could see himself and his dog Nori posing for a selfie. Adding the picture, Siddharth who looked handsome in his clean shaved look, wrote “Daddy showing Nori puppy how to post on insta. She was suitably compressed. 🐾” as his caption.

The post garnered huge reception among his followers as it got 1 lakh likes in no time. Many awed the look of the actor who looks severely young even at the age of 42 whereas others simped for Nouri, his cute little dog. Among the many who commented on his post, a follower asked Siddharth to tell the breed of his dog and the actor, without a second thought, replied saying “Tamil. Indian. same as me”

Many who witnessed Siddharth’s comment, expressed their admiration towards him. “I like the order of words. It reflects your vision and sensibility” commented a follower whereas another one said “I am so proud of you for adopting our great Indian breed”

The actor is very much vocal against the BJP party and received life threats from the supporters of the party. When his personal contact numbers were circulated in social media platforms by the BJP members, police offered him personal protection but the actor refused it saying that the energy of the Police officials should be used for some other cause amidst the pandemic situation.

On the work front, Siddharth is going to be appeared in an episode of Mani Ratnam’s Netflix anthology film “Navarasa”. His part was directed by Rathindran Prasad and the actor is sharing screen space with Parvathi. He is all set to appear in a multi lingual film “Maha Samudram” and in Tamil films “Shaitan ka Bachcha”, “Takkar” and “Indian 2”.

Comment your views on this sensible reply made by the actor !!