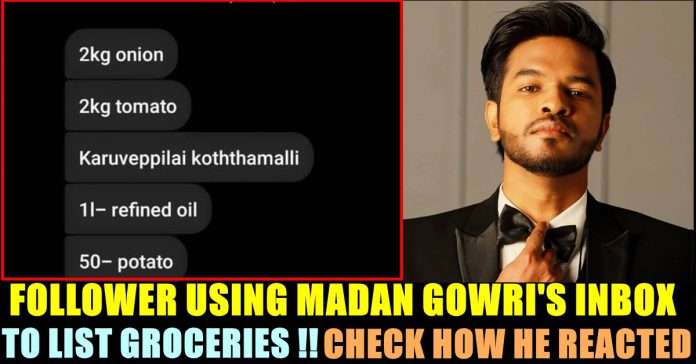 Madan Gowri, a popular Tamil vlogger who is very much known for his infotainment focused videos in Youtube, enjoys more than 32 lakh subscribers for his channel. Apart from Youtube, he is also interactive with his followers in other social media platforms such as Instagram and Twitter where he gained nearly 6 lakh and 70 thousand followers respectively.

It is common for an icon like Madan Gowri to receive text messages from random users of social media regarding various things as he covers topics from all over the world in daily manner. So far Madan Gowri uploaded 996 videos in his youtube channel and receives at least 1 million views per video. However, he couldn’t respond to every text message he receives and couldn’t react to every one of their requests and queries as it is not humanly possible.

Knowing that he won’t receive a reply from Madan Gowri, one of his six lakh followers in the photo blogging social media platform, used the Instagram inbox of the 26 year old vlogger as a notepad to make list of the groceries he is going to buy. As we all know, in Instagram, one could reply to a text of a stranger only after accepting their message request. However, the series of texts sent by this particular follower, grabbed the attention of Madan Gowri who captured the screenshot of it to let his other followers know about it.

In the screenshot, we can see “2kg onion, 2kg tomato, Karuveppilai Koththamalli, 1 L refined oil, 50-potato, 1 cauliflower, Meedhi kaasu meerna rasna pocket” written on it. We have seen several memes with this same concept where the blocked boyfriend would use his crush’s inbox to make list of grocery list. But applying it in the inbox of Madan Gowri is something we didn’t see coming. It is also unknown how many other cinema stars and people with most number of followers received similar texts from this particular Instagram user.

This post from the vlogger is receiving extremely hilarious reactions from his followers. “This guy must be a 90’s kid” said one of the follower whereas another one said that it his confidence level on not getting a reply from Madan. Check out some of the reactions below :

Comment your views on these texts received by Madan Gowri and his reaction to it !!