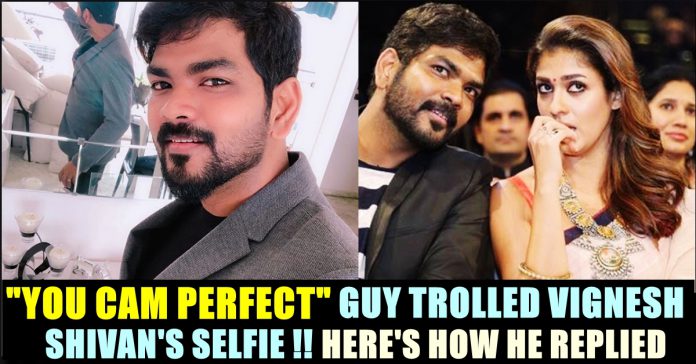 Follower Trolled Vignesh Shivan For His Selfie !! You Must See How The Director Reacted !!

Vignesh Shivan who rose to fame among Tamil audience through directing films like Naanum Rowdy Thaan and Thaana Serntha Kootam is all set to direct his fourth film by having Sivakarthikeyan in the lead. He is one of the many filmmakers who are very much active on social media. Currently the director has made his presence in The 72nd Cannes Film Festival which kick started from May 14. Many Hollywood celebs such as Elle Fanning, Tilda Swinton, Selena Gomez, Eva Longoria, Juliana Moore among others were seen in their best stylish appearances. Among the Indian celebrities, Deepika Padukone Sonam Kapoor, Aishwarya Rai Bachchan and other beauties will be seen during the 11-day long film festival at the French Riviera.

All I have seen & experienced in life teaches me to trust the CREATOR for all that I have not seen … 😇 Life is all about dreams ! One of those dreams slightly , lightly touched … still a long way to Go !! #firstexperience #prestigious #redcarpet #cannesfilmfestival #cannes2019 #instacannes #thedeaddontdie #LoveMyJob #filmfestivals #inspirational #moments #positivevibes #thinkbig #writingmode #finaldraft #SK17

Vignesh Shivan is updating about his presence in the event through his Instagram posts and stories. Cannes was even more special for Vignesh as he met Oscar Award winning Tamil musician AR Rahman. Vignesh Shivan shared a photo with AR Rahman and wrote, “always feel happy n blessed to stand next to this Man.”

Today the director posted a selfie of him by marking the location as Cannes. The selfie showed the director standing in front of a mirror turning back. Vignesh who is currently in relationship with actress Nayanthara, looked so cool in the selfie with the grey blazer.

On seeing the selfie, one of his follower whose username read as denver_dj1997 trolled the director by commenting “Youcam Perfect 😂😂”. As we all know Youcam is a photo capturing app which features many filters in order to improve the fairness of the users in the pictures.

The comment grabbed the attention of the director who immediately replied to it in a funny way. The 33 year old filmmaker took it so lightly and replied him by writing “no bro .. B612 haha 🥳😇”. B612 is also a phone application similar to Youcam. In the world where many celebrities getting offended so easily, it is indeed a warm gesture from the director. As of now the comment of Vignesh received 440 loves from his followers which evidently proves that he gained few fans through his humorous interaction.

Going by Vignesh Shivan’s hashtags, he is currently working on the final draft of SK 17. This untitled film will be produced by Lyca Productions. According to reports, this will be a fun entertainer with Vignesh Shivan and Sivakarthikeyan’s trademark comedy.

Previous articleThis Famous Cricketer Deleted His Tweet On Dhoni Run Out !! Check Out The Reason !!
Next articleThis Tamil Actress Shocked On Seeing Herself In Google Result !! Check Full Statement !!

Weeks after controversy broke out over a first look poster of actor Vijay’s upcoming film Sarkar, which showed the actor smoking, the Madras High Court on Monday...