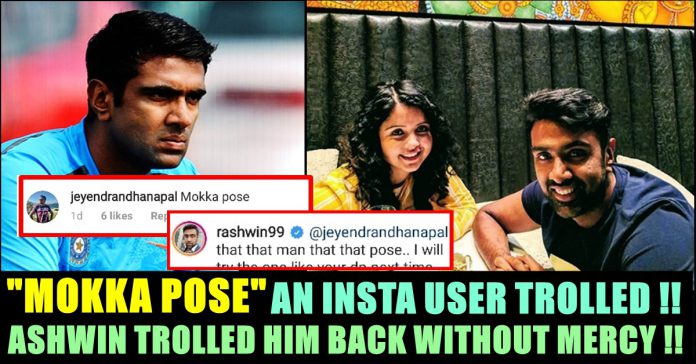 Follower Trolled Ashwin For His Pose In Instagram !! Check How Ashwin Trolled Him Back !!

Known for his sarcastic replies in social media platforms, Ashwin recently posted an old picture of himself in his official Instagram profile. With a caption which said “Throwback”, Ashwin was seen posing for a selfie in the picture.

Internet trolling is something which is almost every celebrity in the world are facing in daily basis. Some won’t mind and react to the trolls they are receiving but some will get offended and give it back to the trollers right away. To this post of Ashwin, one of his follower, tried to mock Ashwin by saying that it is a “Mokka Pose”.

Ashwin who seems to be in a good mood, trolled back the follower by saying that he would pose like the troller in his display picture. “that that man that that pose.. I will try the one like your dp next time. Happy?☺️” read the reply of Ashwin.

Ravichandran Ashwin currently stands 8th in the list of all-time wickets taken by the spinners, which by itself stands out in the current era of supreme batsmanship. However, the ace cricketer is finding it difficult to get place in the playing eleven of Team India. Recent comments from great Mr. Gavaskar and legend Mr. Kumble have attested that Ashwin is still best spinner India have.

As far as, Ashwin’s IPL career is concerned, Ashwin’s transfer to the Delhi Capitals has received a setback as the spin bowler has been unable to negotiate terms with his current franchise. As of now, there is no clarity over where would Ashwin end up in the next season. In last season, Ashwin made it to headlines with his new way of getting a well settled batsman’s wicket, Mankad. The controversy of him getting Jos Butler out created massive controversy and Ashwin is still being mentioned for that incident which happened months ago.

What do you think on this hilarious reply from the cricketer ?? Comment your views below !!

Previous articlePolice Attacked Conductor For Asking Them To Buy Ticket !! SHOCKING VIDEO !!
Next articleVanitha Thrashed Left & Right By Netizens For Liking A Cheap Tweet About Tharshan !! Check Out !!

Popular actress Amala paul who is known for acting in films like "Mynaa", "Velai Illa Pattathari", "Aadai" married to a Mumbai based singer, according...

“So You Want Them To Pick Garbages Forever ?” Old Video Of Vetri Criticizing A Short Filmmaker !!

Known for his socially responsible films, Vetri Maaran always raised voice for the oppressed through his films. His latest venture "Asuran", an adaptation of...