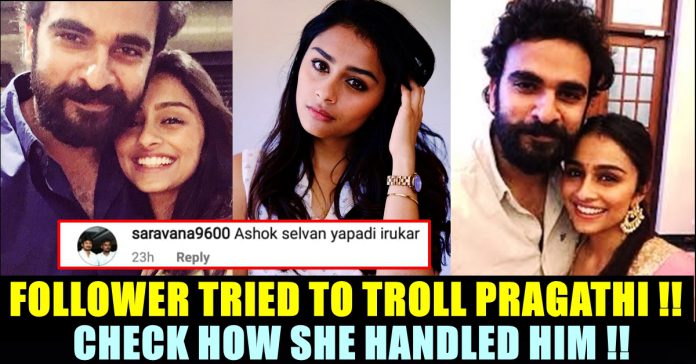 Couple of years ago, a baseless speculation regarding the relationship between Singer Pragathi and Kollywood actor Ashok Selvan brewed up in Internet. On seeing the pictures of the duo, media portals said that they are involved in a romantic relationship. A news media went one step ahead and said that they are going to get married. Immediately denying the rumour, Pragathi posted an Instagram story writing “Guys bunch of people have been messaging me a news article about my marriage.. I’m not getting married now or anytime soon. I promise i’ll tell you if i do”

She also released a press note saying that she is focused on career and a college student who is not in a state to get married. She said that she felt that it was funny at first and got disappointed on seeing more media portals picking it up as a news seriously.

Now, after two long years, a follower, cheekily mentioned the “Soodhu Kavvum” actor in the comment section of the singer’s one of the recent Instagram posts. Singer Pragathi Guruprasad who rose to fame through the reality singing show of Vijay Television, “Super Singer Junior”, is currently involved in modelling. She became the runner up in the third season of the show and got widely recognised by the audience of Television.

She is pretty much active in the photo posting social media application. Recently, she who is currently enjoying 5 lakh plus followers in Instagram, uploaded a post wearing her mother’s attire. “steal from moms closet and call it ~vintage~ 🌻” her caption for the post read.

steal from moms closet and call it ~vintage~ 🌻

On seeing the post, one of a follower named as Saravana, uploaded a comment asking how Ashok Selvan is doing to Pragathi. “Ashok selvan yapadi irukar” the comment read to which Pragathi replied.

The singer simply said that he should ask Ashok Selvan himself to know about him, in a way of brushing the rumour off once again. “You should ask it to him” said Pragathi by writing “avara dhan kekanum”

Check out the screenshot of Pragathi’s reply below :

Recently, The 22 year old artist, reacted to a media report that said that she became an alcoholic addict and started exposing herself for money. The singer said that she is not going to waste her energy on reacting to such baseless allegations. Read : “She Is Exposing Her Body For Money” -News Portal !! “Super Singer” Pragathi Responded

Pragathi was supposed to make her acting debut through Bala’s “Thaarai Thappattai”. However, she opted out owing to her college commitments. In 2016, Director Bala announced that he is going to cast her as a lead actor in his upcoming project. The project got shelved before beginning production due to unknown reasons. As far as her singing career is concerned, Pragathi has collaborated with some of the top music directors of Kollywood film industry such as Yuvan Shankar, Anirudh Ravichander, G.V Prakash, Santhosh Narayanan etc.