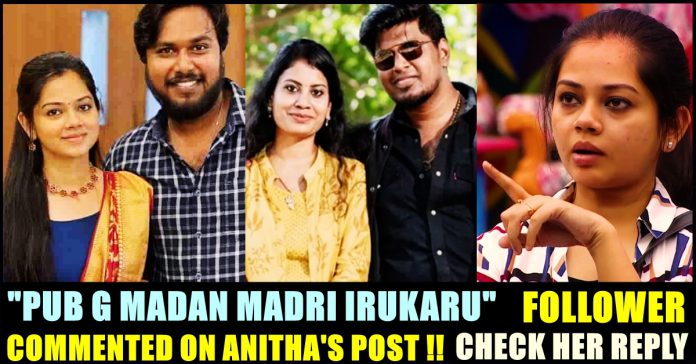 Anitha Sampath of Bigg Boss season four replied to a follower of her who compared the looks of her husband Prabhagaran with PUBG Madan who recently got arrested for making obscene comments against women while streaming his game videos on you tube. People, including his ardent followers, happened to see him for the first time only while he got arrested by the Police. On seeing a recent video uploaded by Anitha in her official twitter handle, a follower said that her husband Prabha looks like PUBG Madan and the BB star replied back in a humorous manner. She also replied to a follower who commented about a recent rumour that said Anitha divorced her husband.

Most recently, Anitha , in her official Instagram handle, shared a video of her husband performing a Hindu ritual for her when she returned home from the shooting of “BB Jodigal” in order to prevent bad vibes affecting her. “When u come home very late after bb jodigal shoot and your hubby dhristhi suthified thinking that u performed so well😂” Anitha said in her caption while sharing the video.

This video won many hearts of her followers. Actress Sherin, Anitha’s Bigg Boss Jodigal partner Shariq and many others awed Prabha’s lovely gesture through the comment section. “you are so blessed” said a follower whereas another one said “So lucky to get such a husband.. God bless 😇”

Meanwhile, on seeing Prabha in the video uploaded by Anitha, a follower said that he looks like PUBG Madan who recently got arrested by the Police for abusing women through his game videos. Replying to him, Anitha referred a popular “Ennenna solraan parunga” phrase from Gopi-Sudhakar’s sketch video which is used to troll people who says baseless lies.

Another user said that what Prabha did was not “Dhrishti” but he was performing an “Aarthi” and asked Anitha to check with her parents. Replying to him, the former news reader said “his love matters” by adding a fire emoji.

When one more user reminded Anitha about the one who spread a rumour on herself divorcing her husband, she replied writing “They are struggling without content it seems.” said Anitha and mentioned about herself making videos with her husband for their youtube channel “Anitha Sampath Vlogs” in a regular manner.

Anitha, during her Bigg Boss stint, never missed to express her love towards her husband Prabha. She made the audience know about how helpful her husband was during her tough times and ever cried her heart out while talking about him to the Bigg Boss in the confession room. Now, the duo are very much involved in appearing in their youtube channel and they jointly are enjoying a separate fan base among the Internet audience.

Most recently, reacting to a “divorce” rumour, Anitha said “Lol, kudave irunthiye sevvala moment. Content illa nu intha level ku erangitingala gossip pages. Daily youtube la onna vlog podrathellam admin pakardhilla pola” in her story which is roughly translated as “Gossip pages like you started stooping this low due to lack of contents these days ? It seems admin of that page didn’t see us posting vlogs together in our youtube channel daily”

H. Vasantha kumar, Tamilnadu member of Parliament from Kanyakumari and a popular business man succumbed to COVID 19 on August 28 after combatting the...

Famous Award Winning Singer Criticized Rajinikanth For Romancing At The Age Of 71 !!

Thodur Madabasi Krishna who is popularly known as T.M Krishna, in his recent tweett, criticized Kollywood Super star Rajinikanth for not being socially responsible...