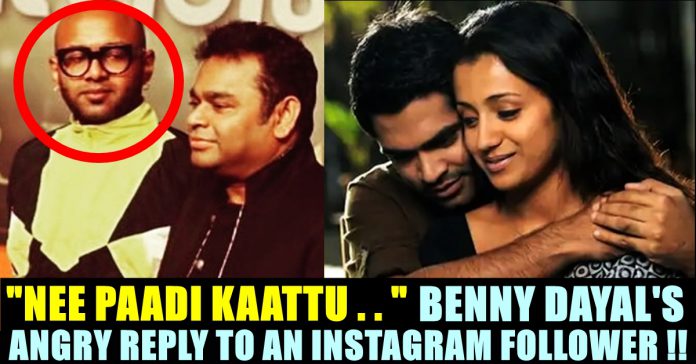 In his official Instagram account, renowned playback singer Benny Dayal who is known for singing some of the best numbers in Kollywood such as “Podaa Podi”, “Poongattre Poongattre”, “Thuppakki Engal Tholile”, uploaded a selfie video of himself singing one of his own blockbuster song. On seeing the video of the singer which was uploaded on Monday, an Instagram follower directly criticized his singing. Benny who saw his comment, got offended and asked him to teach on how to sing or to show how “good” singing is done.

Being a prominent singer in the films of Hindi, Tamil, Telugu, Malayalam, Kannada, Bengali, Gujarati and Marathi languages, Benny Dayal is also one of the judges in famous Super Singer show. He is a member of the band S5 launched by the channel SS Music. He made his acting debut in the Malayalam movie By The People. The flick was a suspense thriller and all the songs were sung by S5 members and it was during that time when A.R. Rahman noticed him, and took an audition.

In his recent post, Benny sang “Omana Penne” from “Vinnai Thaandi Varuvaya” which is considered as one of his best number till date. “I haven’t sung this Run from #OmanaPenne in ages. Was so sleepy so pls forgive my singing if it isnt upto the mark! #music #love #passion #arra” the singer wrote as caption while uploading the video.

I havent sung this Run from #OmanaPenne in ages. Was so sleepy so pls forgive my singing if it isnt upto the mark! #music #love #passion #arra

On seeing this video, the follower named as “Mickie Joe” wrote “ena sir ivalo kevalama padringa ninga paduna pattaye” through his now-deleted comment which is roughly translated as “how could you make your own song look this worse?”

Replying to him, Benny, through his first comment, asked Mickie to teach him on how to sing. “Nee Kathu kudu Mappula” Benny wrote followed by which he added another comment saying “Or else you sing this song” by writing “Illena ne paadi kaatu” in Tanglish.

Check out his replies below :

Internet trolling is something which almost every celebrity who are owning a social media account are facing in daily basis. Some won’t mind and would avoid reacting to the trolls they are receiving but some will intend to teach a lesson to the troller and will let them taste their own medicine. Comment your views on these replies of Benny dayal !!