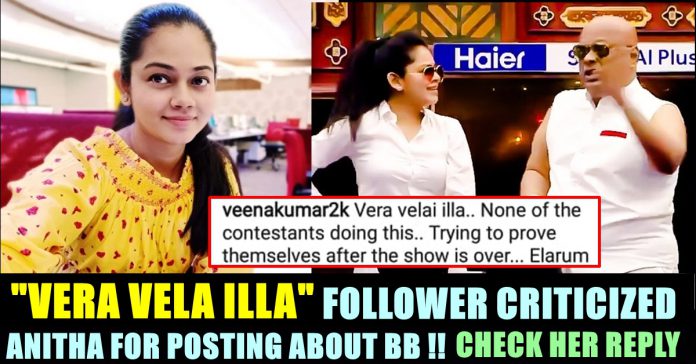 For uploading a video of herself and Suresh Chakravarthy from Vijay TV’s “Start Music” game show, a follower criticized Bigg Boss contestant Anitha Sampath by saying that she is trying to justify herself. The video showed Anitha and Suresh Chakravarthy playing with each other so happily and the former news reader, in her caption, said that the happiness between them will last forever. She also said that whatever happened in the Bigg Boss show is temporary.

Anitha and Suresh Chakravarthy had a rift between each other ever since the latter made a mindless comment on news readers. Followed by that, the duo confronted with each other in several occasions and formed as rivals. Now, weeks after the show’s completion, participants of the Bigg Boss show are taking part in the other reality game shows of Vijay Televsion.

Sharing a video of herself with Suresh Chakravarthy from “Start music” show, Anitha wrote “This video says it all..whatever happens in the show is temporary and this is the real relationship which is gonna last for years..love u thatha @suresh.chakravarthy and thanks @anitha_akka_admirer for sending the video..” as her caption.

Many of Anitha’s five lakh followers adored the video and expressed their love towards the Bigg Boss participant. However, one of a follower spewed hatred at Anitha by writing “Vera velai illa.. None of the contestants doing this.. Trying to prove themselves after the show is over… Elarum BB marandhutanga…u too forget bb and post something 😏 “

Followed by this, the user wrote another comment writing “I mentioned abt her caption of the pic. She is very clearly referring to BB show”

Check out the screen shot of his/her comments :

These comments grabbed the attention of Anitha and she immediately replied writing “ama refer panen..enna IPO?” which means “Yes I shared, What now ??”

Earlier, Anitha said that the female contestants who participated in the Bigg Boss show are going through huge stress due to the negative comments they are receiving from the social media users. She also made trollers to realize that they are not going to earn anything by abusing the contestants. “You will start minding your business after posting a negative comment about an individual in social media but the one who is in the receiving end couldn’t forget it for a long time. It will hurt them” she said in her post.

Oscar winning A.R Rahman turned a story writer and producer through "99 songs", a film which was directed by a debutant named Vishwesh Krishnamoorthy....