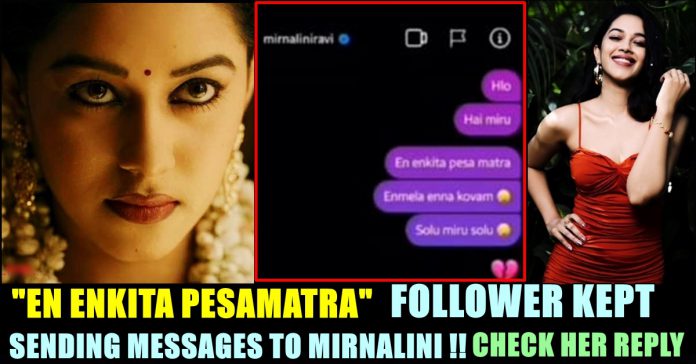 Responding to a follower’s constant text messages and funny yet heartfelt memes, actress Mirnalini replied by adding a special story for him. She asked apologize for not responding to his texts and expressed her love which made the Instagram user happy. To get the actress’s attention, he used a popular video clip of Chief minister candidate Seeman to make a meme.

Mirnalini Ravi, a popular Dubsmash artist who made her debut into Kollywood through Thiagaraja Kumararaja’s Super Deluxe, has committedto a number of projects across south India. She is currently enjoying 7 lakh plus followers in Instagram and enjoys a separate fan base in the photo posting social media space.

Check out the screen shot of the messages he sent to Mirnalini :

In the video Seeman could be seen saying that he is being ignored in the politics of Tamil nadu. “They are avoiding. I am not feeling bad for it as well. You will be searching for me one day.” he says regarding his political stint which is interpreted by the “lol engineers” as it is about love.

Watch the video meme below :

Mirnalini who missed to see the online user’s texts, after seeing the video meme, shared it in her official Instagram account and wrote “Sorry nga . . Lots of love”

Check out the follower’s reply below :

On the profession front, Mirnalini is about to appear in Sasikumar’s MGR Magan in which Sathyaraj also going to play an important role. She is also going to appear as female lead in Vishal-Arya’s “Enemy”. Comment your views on these answers made by the emerging actress !!

Previous articleKP Asks Why People Announcing Their COVID Infection To The World After Sachin’s Tweet !! Yuvraj Replied
Next article“She Is Preparing For UPSC” – – Director Prabhu Solomon On His Daughter’s Videos & Posts !!