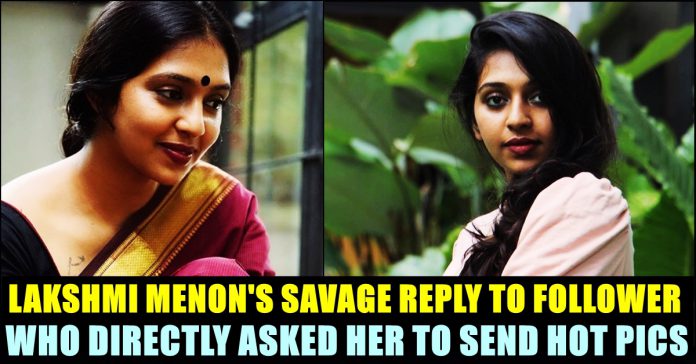 Conducting question and answer session with fans and followers when they are feeling bored is something common among the cinema celebrities. Most of the actresses of Indian cinema are killing their time amidst this lockdown situation only through interacting with their followers through online medium. Lakshmi menon became the most recent actress to have conducted a question and answer session with her Instagram followers. During her interaction, the actress who recently made headlines for her statements against Bigg Boss show, gave savage replies to some of the inappropriate questions of her followers.

After a long gap, actress Lakshmi menon who rose to fame among Tamil cinema audience through films such as “Kumki”, “Vedhalam”, “Jigarthanda” became active it seems. She couldn’t be seen since her last film “Rekka” with Vijay Sethupathi which was released in the year 2015. Now, after five years, Lakshmi menon became busy again by posting pictures in her official Instagram account through which she is currently enjoying 70 thousand plus followers. She started posting pictures in her space from April month of this year.

Unlike previous era where fans and followers waited for hours and hours in front of the houses of their favourite cinema starts to get a glimpse of their appearance, now, anyone who owns a smartphone and data pack could talk to their idols with the emergence of social media. Fans trying to interact with their favourite celebrities through online medium is common nowadays as it became the easiest way for an attempt.

Now, in the Q & A session conducted by Lakshmi, followers came up with questions such as her favourite film, series etc. Meanwhile, few went beyond limit and asked her hot pictures, made marriage proposals etc. To the one who asked her to send her hot pictures, Lakshmi posted a GIF which said “Kiss my ass”

Check out the screenshot of the story here :

A 22 year old guy asked the actress to marry him. “Who are you man ?? You don’t like me doing good in my life ?” she replied to him.

A follower strangely asked the actress to kick his face and the actress replied to him by posting a selfie of her puzzled look.

On the work front, the 24 year old star is expected to be seen in Prabhu Deva’s “Yung Mung Sung” and a film named as “Sippai”. She is also going to pair with actor Gautham Karthik in an untitled project. Comment your views on these replies of Lakshmi Menon to her followers !!

Previous articleTanishq Jewellery Forced To Remove Their Ad From Youtube !!
Next article“Dhoni’s Wicket Is My Dream” When Natti Made His Words Become True !! WATCH

This Bikini Model Is Virally Trending As Nivetha Pethuraj !! : Here’s The Complete Story Behind!!

Actress Nivetha Pethuraj, known for her movies such as Oru Naal Koothu is predominantly appearing in tamil language films, issued a strong statement against those who...

Santhosh Babu IAs who recently announced that he is removing himself from the "Makkal Needhi Maiam" party, replied to a series of tweets uploaded...