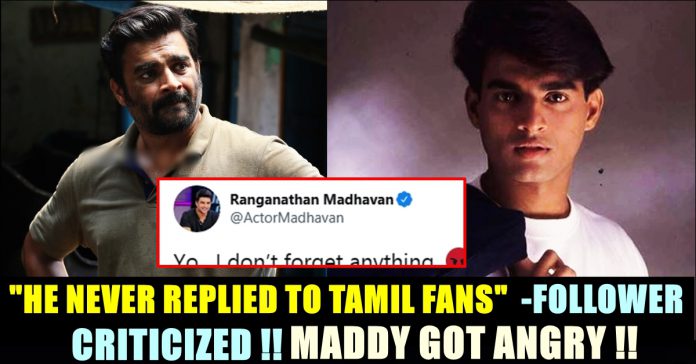 Pan Indian actor Madhavan who is known among Tamil cinema audience for his appearance in films like “Alaipaayuthe”, “Vikram Vedha”, “Irudhi Suttru”, replied to a Tamil nadu based twitter user who expressed his disappointment over him for replying only to non-tamil fans of him in the micro blogging social media site. The actor, by adding angry emojis, has said that he didn’t forget anything about Chennai and Tamil nadu.

Actor Madhavan is making his fans super happy with his existence in social media platforms. Having around 27 Lakh followers, Madhavan is known for interacting with his followers often. The actor who made young girls to fall for him in early 2000s, is now winning hearts of them with his humbleness.

Recently, a twitter user posted a video clipping from Madhavan’s Rehnaa Hai Terre Dil Mein and asked him to disclose the location details. It is the remake of his Tamil film “Minnale”, directed by Gautham menon. On seeing Madhavan saying that the place is in Mumbai in that scene, the fan said that he has been searching for the location all these years. He asked Maddy to tell him where the place is.

This conversation of Maddy and the fan made a Tamil nadu based fan to ask where they shot the scene for the Tamil version. “You liar in reel and real too 🙂 How about the Tamil version Was that place(park) was in Chennai or some where else. BTW Nice to know its not in Mumbai.” the user’s comment read.

You lier in reel and real too 🙂 How about the Tamil version
Was that place(park) was in Chennai or some where else.
BTW Nice to know its not in Mumbai.

A fellow Tamil fan replied to this user saying that he never seen Madhavan replying to Tamil fans as much as he do to Hindi fans. “he forgot his native language!! Bit upsetting…. He has huge fans in tamil too” the follower criticized.

I ve never seen him responding tamil ppl as lyk with hindi ppl guess he forgot his native language!! Bit upsetting…. He has huge fans in tamil too

This tweet grabbed the attention of the main man himself. He who got emotional, immediately replied writing “Yo . I don’t forget anything.” and added angry emojis with a shock emoji.

Fan of the actor who saw this reply of him asked him not to get emotional and showered their support. “We know you man No need to explain” wrote one of a follower whereas another one wrote “We love you maddy….neenga engala eppavum marakka mattinga…”

Check out some of such comments :

I dont think so…he is very responsive to all his fans from all over the country…he doesn't discriminate anyone..he is one of the most courteous artists in our country…

Why would anyone say that… Maddy is namma ooru paiiyan 💖💖

Ranganathan Madhavan was born in Jamshedpur, Bihar (now in Jharkhand), India, to a Tamil Brahmin family. He had a Tamil-speaking upbringing in Bihar. Comment your views on this accusation against the “Aayutha Ezhuthu” actor !!

Afghanistan rode on an unbeaten knock of 74 runs by Hashmatullah Shahidi to pull off a three-wicket victory over Pakistan in a last-over thrilling...