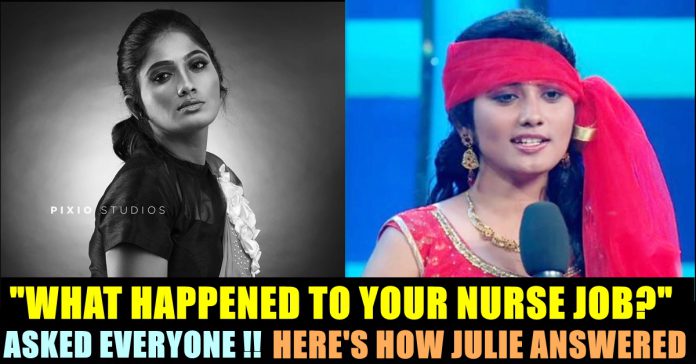 Bigg Boss fame Julie answered to everyone who asked why she is not working as a nurse now. The aspiring actress who says that she has been receiving that question from many people, decided to answer to it once and for all. Due to the nationwide lockdown, many TV starts are spending their time by conducting chat session with their followers. Julie made her statement regarding her profession while answering to one of her follower in a chat session she conducted.

Julie became a familiar face among Tamil speaking netizens, not through Bigg Boss show but through the videos of herself which spread during the historical protest of Jallikattu. She gained a huge sum of support from the protesters for her participation in the protest. The way she led a crowd through her slogans attracted many people’s attention which resulted in Julie becoming one of a contestant in Tamil reality game show Bigg Boss, hosted by Ulaganayagan Kamal Haasan.

Being a nurse by profession, Julie acted in short films and music videos before entering Bigg Boss shows which are available in youtube. After getting participated in the Bigg Boss show, the people’s way of seeing Julie changed completely. Julie became the first victim of Bigg Boss’s “Kurumpadam” which is used by Kamal Haasan to reveal an individual’s original behaviour. Julie gossiping about her co-contestant and actress Oviya to dance choreographer Gayathri Raguramm to gain her support was played as a “Kurumpadam” by Kamal Haasan in the first season. This made vast number of people to hate her. However Julie alleged that 5 seconds of her video footage is missing from that “Kurumpadam”.

After getting eliminated from the Bigg Boss show, Julie started to announce about her movie projects. None of the several projects which was announced by her didn’t get a theatrical release till now. The teaser and trailers of them are available in youtube. She even hosted few dance shows in Kalaignar TV after her Bigg Boss stint.

Now, to that follower who asked Julie about her nursing profession, she said “Everyone asks me this. I am into acting now. Nursing is a holy profession that needs full dedication and hardwork. It’s not possible to do nursing like other jobs as a freelancer. And handling both jobs at the same time is very difficult coz shoots may make us go late for work and patients would be waiting I cannot risk patients life” she said in her post.

Julie is currently keeping her followers engaged by posting her photos from various photoshoots. She was last seen in Hip Hop Tamizha’s “Nan Sirithaal” and is expected to appear in more films.

Random Insta User Tried To Troll Mahesh Babu’s Wife !! She Shut Him Down Like A Boss !!

When a person becomes a celebrity, each and every choice they make in their personal life subjects to online troll. Public starts to take...

Activists Got Arrested For Inaugurating Flyover Before CM !!

Activists Nipun Cherian, Sooraj Angelos and Raphael of V for Kerala unit got arrested in Kerala for opening a fly over to reduce the...

BREAKING : Rajinikanth Asks Media People Not To Spoil His Friendship With Kamal Haasan !!

Speaking to reporters outside his Chennai residence, barely ten days before Tamil Nadu goes to the polls, Superstar Rajinikanth clarified his political stance and...

“Why Is Even Following Her?” Netizens Questioned Modi !!