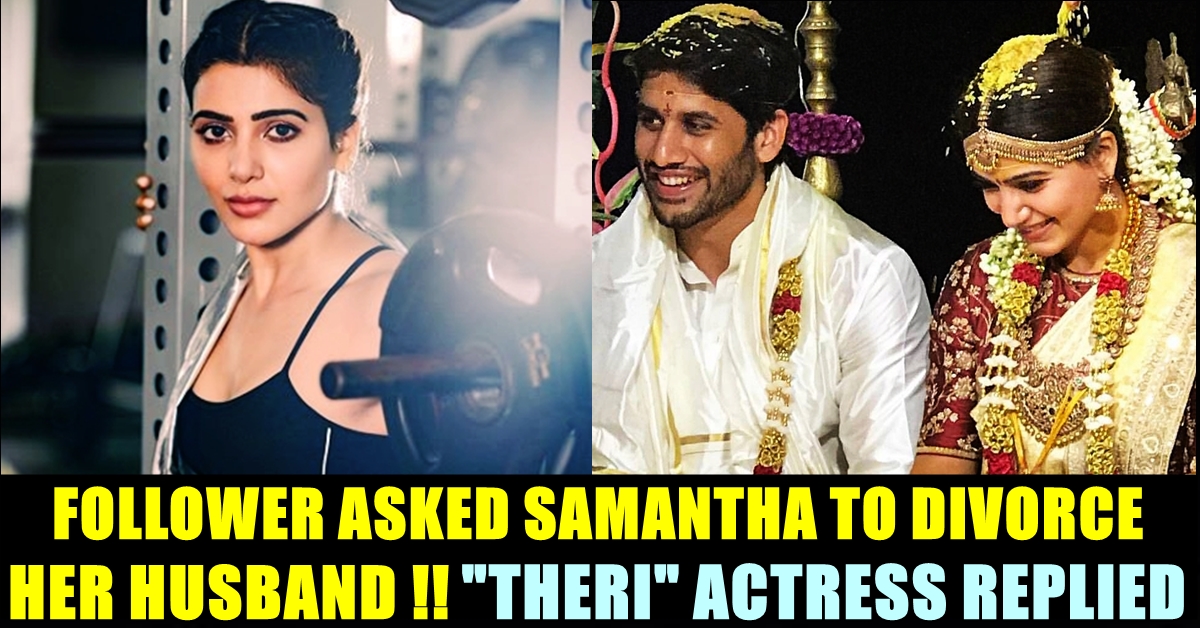 Samantha is one of the prominent South Indian actresses who never shied away from expressing her opinions in Public. Be it right or wrong, she always gave fitting replies to her trollers and abusers. She also never missed to reply her fans who post adorable messages to show their love.Currently, the actress is single after divorcing her celebrity husband Naga Chaithanya and is actively involved in concentrating on her profession. Now, a reply made by the actress to a follower years ago is trending in the social media platforms.

Samantha and Naga Chaithanya announced about their divorce on 1st of October 2021 and the duo sought privacy through their respective social media posts. Post the announcement, Samantha faced so many negativities and hardship. However, the actress is currently busy focusing on her career and her social media feed is filled with her pictures and videos from her photoshoot, Gym session, movies updates and brand advertisements.

Check out some of her recent Instagram posts below :

A post shared by Samantha Akkineni (@samantharuthprabhuoffl) on Sep 20, 2020 at 8:47pm PDT

A post shared by Samantha Akkineni (@samantharuthprabhuoffl) on Sep 15, 2020 at 3:58am PDT

A post shared by Samantha Akkineni (@samantharuthprabhuoffl) on Nov 2, 2020 at 11:21pm PST

Having more than 20 million followers, Samantha always goes that extra mile to keep them engaged. On 5th of November, 2020 the actress uploaded a picture of herself striking a happy pose and wrote “Feeling good” in the picture. Check out that post here :

A post shared by Samantha Akkineni (@samantharuthprabhuoffl) on Nov 4, 2020 at 9:35pm PST

The post already garnered huge reach and various kind of reactions are pouring as comments. Meanwhile, one of a guy came up with a comment asking the actress to divorce her husband Naga Chaithanya so that he can marry her. In Telugu, he wrote “Chay ki divorce icccheyi mana iddaram pelli chesukundham 😒💋☹️”

Unlike other female cinema celebrities who would have lost their nerves and blocked the follower right away, Samantha made a cool reply to her admirer. The actress said that it is difficult for her to do it and suggested the fan to ask her husband himself.

Before that, to a follower who asked about her pregnancy, the actress who looked extremely tired of answering the question, sarcastically replied “I have been pregnant since 2017 I think. This baby really doesn’t wanna come out. huh”

However, This is not the first time the “Kaththi” actress is answering this way to a question on her pregnancy. “For all those of you who are really interested in the functioning of my body, I’m gonna tell you, I ‘m gonna have a baby on the 7th of August at 7 a.m, twenty twenty two (2022), that’s it” Sam said last year while replying to a follower.

Samantha got married to Telugu actor Naga Chaitanya on October 7th of 2017 and divorced him on 1st of October 2021. Samantha is basically born and brought up in Pallavaram, Chennai. Despite her mixed regional background, she has cited herself as a Tamilian. On the work front, Sam who was last seen in Kaathu Vaakula Rendu Kaathal is expected to pair up with Thalapathy Vijay in his 67th project.

Suchithra Getting Slammed By Netizens For Her Biased Judgement !!
Former Bigg Boss Contestant Questioned About The Deleted Promo !!
Advertisement