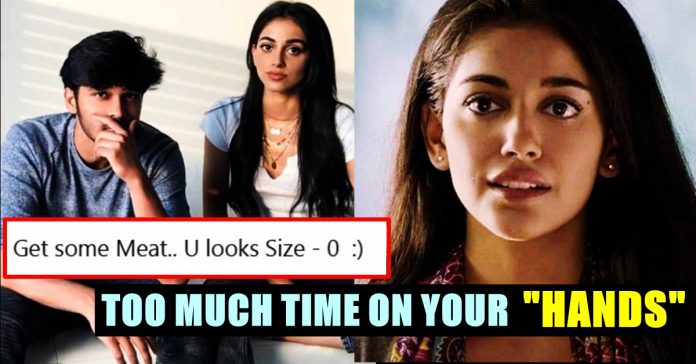 Follower Asked “Adhithya Varmaa” Heroine To Gain Weight !! Check How She Shut Him Down !!

Female celebrities shutting down their abusers in online media became common and it is happening in daily basis. In many occasions, female actresses, exposed the abusers who annoyed them in their inbox and made them delete their accounts. In this occasion, Banitha Sandhu, the actress who rose to fame through a bollywood film named as “October” has trolled a criticizer of her in style.

The online user who body shamed Banitha Sandhu asked her to gain some weight and he mentioned it as “Meat”. The actress who is busy in promoting her upcoming Tamil movie “Adhithya Varmaa”, posted a tweet today about her dressing in the audio launch of the same movie. In the post, the actress said that he styled herself for today’s event and did make up on her own.

I styled myself today & did my own make-up 🤪 love love love @RealisationPar 👗 https://t.co/EYTstkBjoC

On seeing Banitha in this picture, the online user wrote “Get some Meat.. U looks Size – 0 :)” in the comment section. check out his tweet below :

This tweet gained the attention of Banitha who immediately replied back by trolling him. In her tweet Banitha said that the user is having too much of work for his “Hand” and asked him to get a hobby to engage himself.

“get a hobby… u clearly have too much time on your hands :)” read the reply of Banitha which is now going viral across all the social media platforms as screenshots.

get a hobby… u clearly have too much time on your hands 🙂 https://t.co/SNVMhbbE6y

Check out the screenshot of the conversation below :

Internet trolling is something which almost every celebrity who are owning a social media account are facing in daily basis. Some won’t mind and would avoid reacting to the trolls they are receiving but some will intend to teach a lesson to the troller and will let them taste their own medicine. Banitha belongs to the second category it seems.

Banita Sandhu is a British actress. She was born and raised in Caerleon, South Wales and is of Punjabi descent. Banita began acting as a child in local stage and film productions when she signed her first agent at just 11 years old. She was opted in to do the female lead role after actress Megha Chowdhary completed acting the role in the Bala’s version.

What do you think on this reply of the actress ?? Comment your views !!

Actor Suriya opened for the first time regarding the controversy that is taking place in social media for the past three days. Even since...