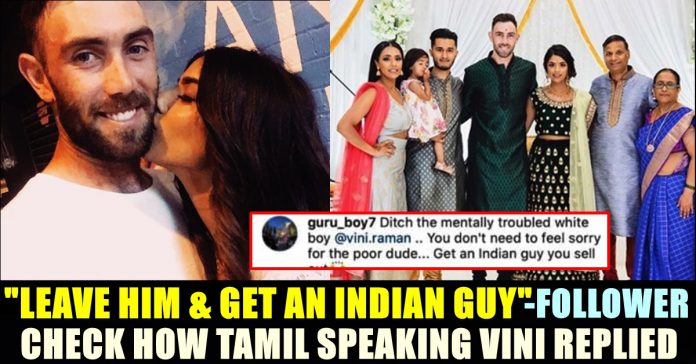 Australian all rounder Glenn Maxwell is currently busy playing in the IPL tournament for the Kings 11 Punjab team. Vini Raman, his girlfriend who is currently residing in Australia, has been expressing her emotions on missing his boyfriend through her Instagram account. Recently, she uploaded a post saying that she is wishing to be in UAE with her boyfriend. “Spending another weekend in lockdown but wishing I was in the UAE.
4 weeks down, ? to go 💕” her caption for the post read in which she could be seen striking a pose for a selfie.

Spending another weekend in lockdown but wishing I was in the UAE. 4 weeks down, ? to go 💕#whysoserious #fomo @gmaxi_32 @kxipofficial 🏏🦁

As we all know, social media is not a place where we could expect 100% positivity. A follower of Vini Raman, posted a rude comment asking Vini to leave Maxwell, saying that he is mentally troubled “white boy”. He further asked her to marry an Indian guy

Frustrated Vini raman, immediately replied to him saying the guy is clearly fishing for a reaction. “Unlike you, I don’t see colour, I can love someone regardless of their nationally or ethnicity and that is completely my choice. I don’t have to base my life decisions on the opinion of a faceless random on the internet and I surely don’t have to justify it. I don’t like what you see keep scrolling champ” she replied.

Further, Vini also captured the screenshot and shared it in her story. “So I don’t normally respond to comments like these as I know trolls do it just to get attention. But a 6 month lockdown has left me with plenty of time to educate ignorant morons” she said in her story.

Vini Raman and Glenn Maxwell are dating each other since 2017. The explosive batsman disclosed the news on Instagram few months ago, confirming that they two got engaged. Vini Raman, a 27 year old Tamil nadu origin, was born and brought up in Melbourne. The two have, reportedly, met at a Melbourne Stars event and have been dating for the past 3 years, and have been posting pictures with each other on Instagram for quite some time now. Vini is a pharmacist by profession.

Recently, in a way of showing her love to Tamil films, Vini, to one of her follower said that Superstar Rajinikanth’s Padayappa is her favourite film and she wants to show the film to Maxwell as soon as she gets a quality DVD with subtitles as Maxwell made her to sit through 100 hours to watch star wars, a Hollywood movie.

Check out the screenshot of her answer below :