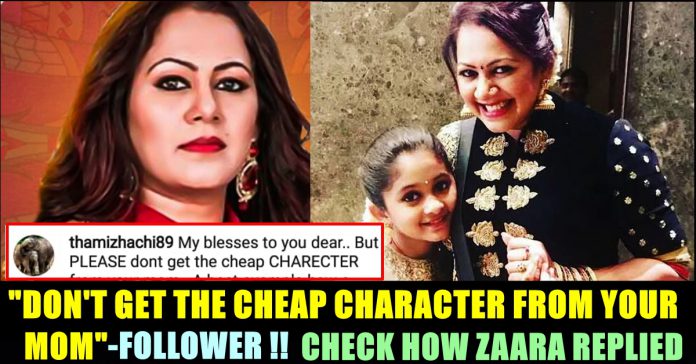 After getting evicted from the house, Archana announced that she is quitting from Twitter and said that she will bounce back stronger. However, as we all know, social media is a place that it known for spreading negativity. A number of Instagram users who seems to be the ardent followers of the Bigg Boss show, breached the Instagram account of Archana’s daughter and advised her to stay away from her own mother. However, the fitting reply provided by the 12 year old Zaara is trending in Internet.

Archana Chandhoke got officially evicted from the season four of Kamal Haasan hosting Bigg Boss show. She who got nominated with Aari, Shivani, Somashekar, Rio, Anitha Sampath and Aajeedh, got eliminated from the show after receiving less number of votes from the viewers of the reality game show. Since her eviction, Archana is pretty much active in social media platforms, so as her daughter.

Archana Chandhoke, a TV host by profession, entered the Bigg Boss house as a wild card contestant. Initially, she was expected to play the game with the spontaneity which she used to have while hosting shows and interviewing celebrities. She who is hosting shows for past several years is also known for her humour sense.

On seeing her restricting herself within a small circle of people inside the Bigg Boss house, fans of the show got disappointed and started criticizing her in social media platforms through their comments. They firmly believed that contestants such as Aranthangi Nisha, Rio raj and Soma shekar lost their individuality due to the excess amount of love poured by Archana on them.

Now, on seeing a throwback picture uploaded by Archana’s daughter Zaara in her Instagram handle, a follower advised her not to get the character of her mother. “Those beautiful Wedding Days!! Missed you so much amma! So happy that you are back!❤️❤️” read the caption of the post in which Archana and Zaara could be seen smiling for a pose.

Replying to this post, an Instagram user named Tamizhachi wrote “My blesses to you dear.. But PLEASE dont get the cheap CHARECTER from your mom.. A best example how a woman should not be with a family is your mom..” Also Read : Archana’s Daughter Uploaded An Emotional Post After Her Mother’s Eviction !!

Zaara, however, without loosing her nerves, schooled Tamizhachi to stop judging people’s character. “it’s my mother and you have no right to judge her. I am who I am! She is who she is! Stop damaging everyone’s character in the comment section! Get well soon! And GOD BLESS YOU! ❣️❣️” Zaara said in her reply to shut Tamizhachi once and for all.

However, this is not the first time Zaara is giving back to haters through the photo/video posting social media platform as people are spewing hatred against her mother in the comment section of her every post. Archana got married to Vineeth Muthukrishnan on 7th of May, 2004. The couple are having a adorable daughter named “Zaara” and Archana posted many pictures with her daughter in her official Instagram account in which she enjoys 8 lakh plus followers as of now.

We all have come across a girl who named as Indulekha wearing "Burqa" to protest against the law passed by the BJP government. The...

Deputy Commissioner Lauded Sivakarthikeyan For Being A Teetotaller !!

Sivakarthikeyan , an actor in Kollywood film industry is an inspiration to enormous number of Tamil youngsters today. The path he came through to...