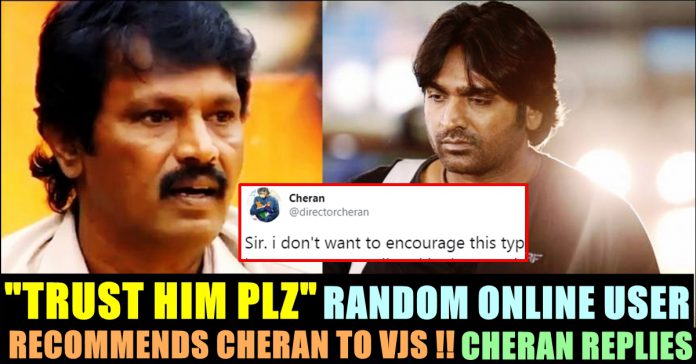 One of Vijay Sethupathi’s next film is going to be with Director Cheran what we heard from Cheran himself while he was in the Bigg Boss house. The director who made “Thirumanam” lately is awaiting for the call sheet of the hero who has half a dozens of project lined up.

When Cheran was asked what he is going to achieve through participating in Bigg Boss, Cheran said “I gain money through Bigg Boss primarily. But the real reason behind my Bigg Boss stint is to connect with the people. There were 4 years of gap in my cinema career. I wanted to make people get used to my face again.” said Cheran. He also revealed an unknown fact about his Bigg Boss entry while interacting with his co-contestants. The actor/director said that Vijay Sethupathi is the one who sent him to the house of Bigg Boss.

“While asking me to enter Bigg Boss house, Vijay Sethupathi said that Bigg Boss is being watched by people across the state. He wanted me to share my 35 years of experience to those people which will be useful to them. Vijay Sethupathi wanted me to introduce myself to this current generation. Be it a loan crisis, or career fall, Family relationships, my experience will be a lesson to the people who watch this show is what Vijay Sethupathi believed.” Cheran added who officially announced that his next project would be with the “Pizza” actor.

After coming out of Bigg Boss house, Cheran’s “Rajavukku Check” in which he appeared as protagonist released. The actor/director became very much interactive in social media platforms with his followers thanks to the Bigg Boss show. However, no updates on his project with Vijay Sethupathi surfaced. One of a follower of Cheran, decided to recommend Cheran to Vijay Sethupathi through one of the actor’s twitter post. He asked Vijay Sethupathi to trust Cheran and said that the film will be a feat if they both join hands together. He posted it as a comment in a promotional post of Vijay Sethupathi.

Dear Vijay Sethupathi Brother,@directorcheran has worked on a script by presuming that u wl be suitablefor his Story and he is waiting for your response. As good actor and as a good diector , ifu jOin together and do that movie which will be a great feast to all. Trust him Plz

Cheran who got notified with this tweet, immediately replied to it by saying that he is not going to encourage such tweets. The filmmaker said that Vijay Sethupathi knows him very much and he has his plans. He said that such topics are not meant to be discussed in social media platforms. “Sir. i don’t want to encourage this type of tweets .. He knows me very well and he have a plan to do my film in soon… So pls don’t push or tweet like this at social platforms sir.. It will create lot of probs… Hope you take this positively… Thanks Sir..” read the reply of Cheran.

Sir. i don’t want to encourage this type of tweets .. He knows me very well and he have a plan to do my film in soon… So pls don’t push or tweet like this at social platforms sir.. It will create lot of probs… Hope you take this positively… Thanks Sir..

Check out their further conversation below :

Vijay Sethupathi is all set to appear in Vijay’s Master as antagonist. He also committed in S.P Jananathan’s “Laabam”, Seenu ramasamy’s “Maamanithan”, Manikandan’s “Kadaisi Vivasayi” and few other language films including the one with Aamir Khan which is touted to be a remake of Hollywood classic “Forrest Gump”. He is going to do the role of “Bubba” according to sources.

Previous articlePrakash Raj Firmly Denied To Act With Rajinikanth In This Film !! WATCH
Next articleIT Employee Committed Suicide Due To Work Pressure ??