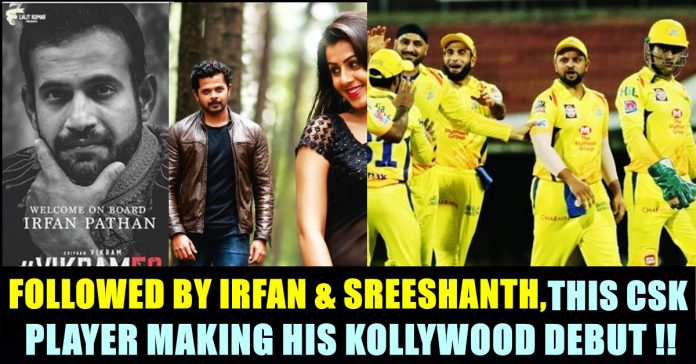 Veteran players of Indian cricket team in the golden era are marching towards Kollywood industry to make their debut in acting. Not many days ago we informed that controversial cricketer Sreeshanth is going to make his Kollywood debut through Hansika Motwani’s horror-comedy. Yesterday, the makers of Vikram58 announced that India’s one of a significant all rounder Irfan Pathan is going to don a cop role in their movie.

Now to our surprise, popular right arm spinner and the senior most player of Chennai Super Kings, Harbhajan Singh is also going to make his Kollywood debut in the next film of Santhanam. It is notable that all the three players have not announced their retirement from their cricketing career.

The film which is titled as “Dikkilona” has Santhanam in the lead role. It is said to be a science fiction and Santhanam is going to appear in triple action as per reports. Producer by KJR Studios, the film has Yuvan Shankar Raja as music composer. Karthick Yogi is directing the film.

To make this announcement, KJR studios took to twitter and proudly introduced Harbhajan Singh to Tamil cinema by writing “We are very excited about this collaboration with @harbhajan_singh! Welcome aboard🤩”. Check out their post below :

Being a veteran Indian off spinner since early 2000s, Bhajji playing for team India for several years. He recently impressed fans with his performance in Chennai Super Kings team in IPL tournament. Not only his on field performance but also his lovable Tamil tweets gained him vast number of tamil audience. He became the darling of Tamil meme nation for his funny Tamil tweets after every Chennai Super Kings match. However, The reason behind Harbhajan’s frequent tweets in Tamil is an engineer from Chinnalapatti, P.Saravanan.

On the other hand Santhanam was last seen in A1 which is romantic comedy. “Dikkilona” is expected to release in the summer of 2020. Harbhajan Singh, posted a “Thanks” tweet for the supporters of him from Tamilnadu through his official twitter account.

Comment your views on Bhajji making his Kollywood debut !!

Previous articleEXCLUSIVE : Top Indian Cricketer Joined Hands With “Chiyaan” Vikram For His Next !!
Next articleFan Questioned Cheran For Not Meeting Madhumitha !! Here’s How He Replied !!

Senthil Balaji, minister of Electricity, Prohibition and Excise made a hilarious reply to a popular netizen who made a complaint about a damaged Electric...