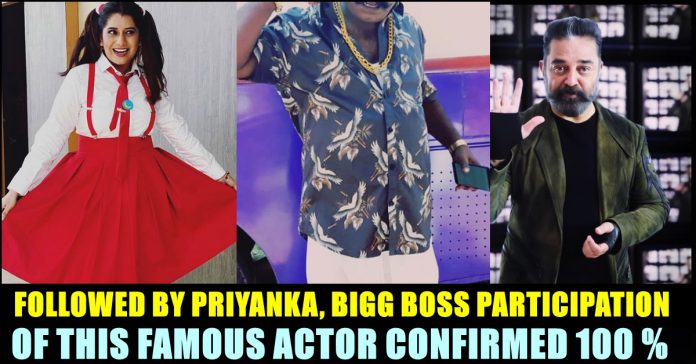 Followed by Vijay TV anchor Priyanka and Shakeela’s daughter Mila, participation of another contestant got almost confirmed. Season five of Kamal Haasan hosting Bigg Boss show is all set to stream from 3rd of October. Amidst the rumours that took place about the change of host in the upcoming season, Kamal appeared in a number of promos and kept a full stop to the baseless rumours. Now, speculations on the 15 celebrity contestants are going on in full swing with many naming several known celebrities.

Promotional videos starring Ulaganayagan Kamal Haasan started surfacing in the official social media handles of Vijay Television ahead of the fifth season of the Bigg Boss show. Brushing off the rumours on the change of host, Kamal Haasan has been nailing it with his same old charm and looks in the promos. However, as expected, speculations on the 15 plus celebrity contestants are doing rounds in social media platforms.

After the release of the first three promos, questions about the 15 plus celebrity contestants who are going to take part is being unanswered still and speculations about the same is being made across the Internet. Many media portals came up with a list of celebrities who could participate in the cash rich show. Now, it has been confirmed that “Imman” Annachi who is known for his rural slang is going to take part in the 100 days show.

“Imman” Annachi is known for hosting shows such as public opinions, Kuttees, Chuttees etc in Sun Television. He also appeared in films as a comedy actor. His rural slang with timing sense gained him a recognition among the Television audience and his presence inside the Bigg Boss house is going to be fun, believe netizens.

Anchor Priyanka’s name is doing rounds as one of the contestants, ever since the announcement about Bigg Boss season 5 got surfaced. Recently, in a way of confirming the same, recent promo of Super Singer 8 released with Ma.Ka.Pa making the announcements instead of Priyanka. Shooting of Start Music’s third season started with Bharathi Kannamma team and Ma. Ka. Pa hosted it too instead of Priyanka. Moreover, Shivangi has been appointed as the anchor of the ongoing Super Singer season which became evident through one of her recent stories.

Previous article“She Is Not Even Respecting You” – Follower !! Cheran Answers On Why He Still Supports Losliya !!
Next article10 Times When Kollywood Villains Won Our Hearts More Than The Heroes!!

In an audio interview to the press and media, Director Parthiban, "Iravin Nizhal" of whom got released recently, issued a clarification on the incident...

“I Have Crossed All My Boundaries” – Celebrity Photographer Prashanth

After being called out by several women in social media, famous photographer named Prashanth came up with a post in his Instagram handle, seeking...