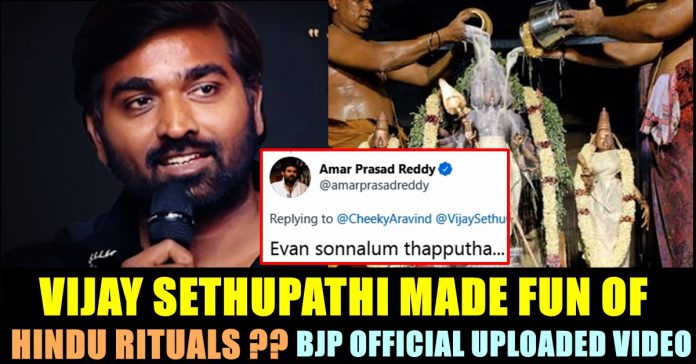 Not many days ago, a public speech of Jyothika created huge controversy among the social media users which resulted in actor Suriya releasing a press note to support his wife’s stand. Now, a similar controversy has surfaced in the micro blogging social media site against actor Vijay Sethupathi who supported Suriya’s press note in Twitter.

Amar Prasad Reddy, media advisor of Union Minister of State for Health and Family Welfare and BJP supporter has came up with a video clipping of actor Vijay Sethupathi from a show named as “Hero” telecasted in Sun Television. In the video we can see Vijay Sethupathi referring a joke of Late crazy Mohan regarding an anointment to Hindu gods.

In the video shared by Amar, Vijay Sethupathi can be seen saying “They will usually show the anointment ceremony to the devotees in a Temple. After completing the process, they closed it with a screen. When a child asked his grandfather why they are closing it with screen now. He said that they are going to change clothes to God as he just took bath. For that, the child asked, they showed how God took bath but closed while changing clothes?” which made the entire hall to erupt in laughter.

Sharing this particular video clip, Amar Prasad said that he feels that the statement made by Vijay Sethupathi as highly derogatory. He also threatened to expose the secret life after 10 : 30 in his tweet. “Vijay Sethupathi and other cine actors in Tamil Nadu, such statements about #HinduGods are intolerable and highly derogatory.
If this continues we are ready to expose your secret life after 10.30 to public.” he wrote in his tweet by tagging H.Raja, Pon Radhakrishnan, Hindu Munnani Nellai, Official Twitter page of BJP party and actress Lakshmi ramakrishnan.

Evan sonnalum thapputha… All are equal, there should be peace and happiness, not hate and bad vibrations.

This tweet attracted the attention of actress Lakshmi ramakrishnan who was tagged. She asked Amar to check on what context he said it before getting offended. The actress also felt that Vijay is making fun of Hindu rituals and practices.

It is NOT a derogatory statement against #HinduGods , but it is definitely making fun of Hindu practices & rituals. May be, he didn’t mean it that way! On what context he said it is important, pls check that before you feel offended Mr Amar, it is a humble request🙏 https://t.co/w9A8NxKfVX

Here’s how the conversation went on between Lakshmi Ramakrishnan and Amar :

I am not supporting Amarji, not at all , but would like to know when and on what context he said it,?before I take a stand and raise my voice. There is no doubt that stars have to be responsible as their voices reach out far & wide.

For believers and those who consider the temple & the rituals as sacred will definitely feel hurt. Nobody will dare make fun of religious practices of any other religion, I agree!!But again, the context, pls check that before getting into conclusions & when did he say this?!! https://t.co/w9A8NxKfVX

Even since the speech of Vijay Sethupathi in “Master” audio launch surfaced, he has been facing the wrath of a particular set of people. In his speech, The actor directly slammed the so called godmen by asking people not to believe them. “We should understand that the only things that exists is humanity. No super power will come from sky to save us” he said during his speech. “It is humans who are living on earth, not God. Only a human could save his fellow human. This is a place which is made for humans and we should live by sharing love towards each other” he said during his speech which made the believers of God angry.