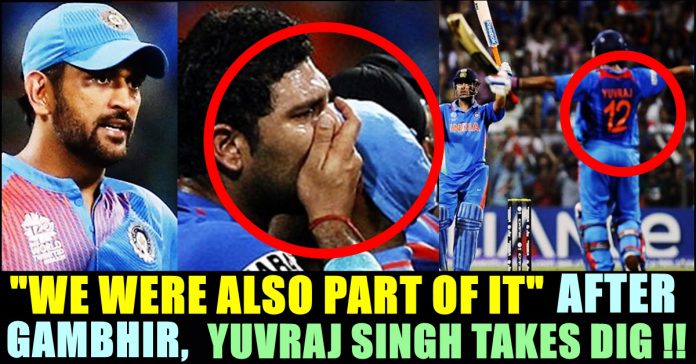 Followed by Gautam Gambhir who took direct dig at ESPN Tv channel for praising Dhoni alone for the victory of 2011 world cup, Yuvraj Singh asked coach Ravi Shastri to give him credit for winning the world cup. India clinched the world cup of 50 over One Day International for the first time on 2nd of April of year 2011. The match which took place between India and Sri lanka, was won by the blue team comfortably with Gautam Gambhir and Dhoni’s stellar performance. Gambhir’s fighting 97 to build the initial score and Dhoni’s 91 to finish the chase got India the cup after 28 long years. (Also Read : Gautam Gambhir’s Direct Slap To Media For Praising Dhoni’s Six !!)

On seeing a post of from ESPN’s official twitter page which praised the six of Mahendra Singh Dhoni, Gambir directly too a dog by saying “Just a reminder ESPNcricinfo : #worldcup2011 was won by entire India, entire Indian team & all support staff. High time you hit your obsession for a SIX.”

Now, former Indian player Yuvraj Singh who received the man of the tournament award in 2011 world cup, came up with a similar tweet. Indian Coach Ravi Sashtri who did the commentary during the 2011 world cup, yesterday posted a tweet congratulating team India for winning the cup. He himself being an integral part of India’s 1983 world cup winning team, wrote “Many Congratulations Guys! Something you will cherish all your life. Just like we from the 1983 group” by posting the video of Dhoni’s last ball six.

Many Congratulations Guys! Something you will cherish all your life. Just like we from the 1983 group #WorldCup2011 – @sachin_rt @imVkohli pic.twitter.com/1CjZMJPHZh

As we can see, Ravi Shastri tagged Sachin Tendulkar and Virat Kohli’s official twitter account while uploading this post. Yuvraj Singh who is very much active in social media platforms, immediately said that he can tag him and Dhoni as they are also part of it.

“Thanks senior ! U can tag me and mahi also we were also part of it” wrote Yuvraj with a laughing emoji. Check out his reply below :

Thanks senior ! U can tag me and mahi also we were also part of it 😂

This reply from Yuvraj received as many as 15,000 likes and several reactions from the fans of Indian cricket team. Check out some of their reactions below :

You got the point 😂🤣

To this comment of Yuvraj, Ravi Shastri replied by saying “When it comes to World Cups, you are no Junior. Tussi Legend Ho”

When it comes to World Cups, you are no Junior. Tussi Legend Ho @YUVSTRONG12 ! 🤗 https://t.co/bnZHTyFd8x

Comment your views on this cheeky reply of the lefty !!

“It Is A Male Driven Industry” – Video Of Andrea Slamming Kollywood

An old video of actress Andrea who is known  among Tamil audience, for appearing in critically acclaimed films such as "Tharamani", "Vada Chennai", is...

Comedy Actor Vivekh who is known for his socially responsible opinions in his movies, is no different in his real life as well. He...