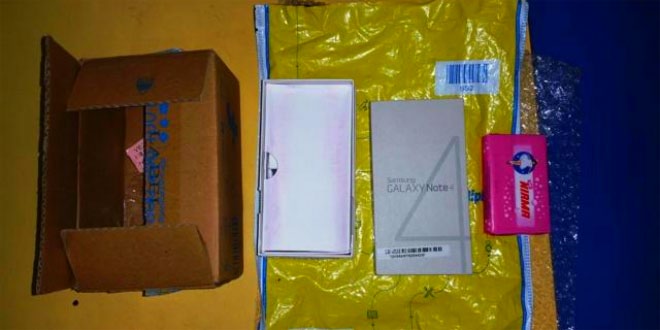 manisharajavel
June 9, 2016
Share
Facebook
Twitter
Pinterest
WhatsApp
Flipkart,
the famous online shopping site, has delivered another foul product to its
customer. It has sent rock, bricks, and an empty box previously to the
customers and now it has sent Nirma soap
to the customer who had ordered a Samsung
Galaxy Note 4.

Anand
Bhalakia, who works at a leading global IT, , ordered the
mobile on May 25th and it has been delivered to him on May 30th. When he received
the parcel and opened up the case, he found a charger and Nirma soap in it and
was shocked.
He had chosen
the cash on delivery option and when
he received the product he had paid Rs. 29,900 for the delivery boy. He was
very much excited and went to open the case and was stunned seeing the Nirma soap
in it . He immediately called the delivery guy who was about 10 minutes away
from his home. The delivery guy told him to book a complaint against it at the
customer care number.
He called the customer care for
complaining and they said the complaint is not a genuine one. So he went to the
station and filed an FIR under the Section 420 (cheating and dishonestly
inducing the delivery of the property) of the Indian Penal Code. He called them
many times but Flipkart didn’t replace nor refund the amount but once the case was
registered Flipkart refunded the amount immediately.
“We will
begin our investigation by taking the statement of the delivery boy, after
which we will look into other aspects of the case,” police sub-inspector
Devidas Chaudhary from Malabar Hill police station said.
“Flipkart observes a zero tolerance
policy on incidents that impact customer trust. We are conducting an internal
investigation into this case and are putting all efforts to find out the real
facts of this incident. Meanwhile, as a responsible marketplace, the money has
been refunded to the customer in good faith,” Flipkart said in written
statement.
Previous articleList Of 8 Things We Chennaites Do Without Fail Whenever It Rains!!
Next article20 Lip Smacking Breakfasts From Various States In India!

A hashtag saying "Boycott Amazon" is trending in Internet with nearly 10,000 tweets from the users of Twitter. The prominent reason behind the hashtag...