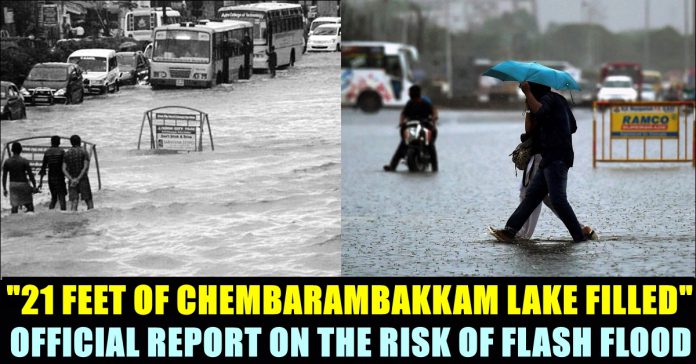 Due to the constant rainfall in the city, the Chembarambakkam lake, located about 25 km from Chennai, has touched a storage level of 2,781 mcft which is 76 per cent of its total capacity for the first time since 2015. Chembarambakkam is one of the two rain-fed reservoirs from where water is drawn for supply to Chennai City, the other one being the Puzhal Lake. The Adyar River originates from this lake. A part of water supply of the metropolis of Chennai is drawn from this lake.

The 76% of water capacity has brought back the dark memories of flooding and inundation in the Chennai city. However, officials have made it clear that there is nothing to worry now and updated that the water will be released only if there is a heavy downpour continuously for three days.

An official from Public works department has said that the water is at 21 feet as of now against the total depth of 24 feet. “Water will only be released if the level crosses 22 feet. There is a chance for that only if there is very heavy rainfall for 78 hours continuously. But, on Monday itself, rain intensity was less” he said who added that there will not be any flash flood like 2015. He also assured that the officials are taking proper precautionary measures and monitoring the water level very closely.

“A proper alert will be given before water release and encroachments near the river will be cleared” he said. Reports said that the government has stopped releasing water into the Chembarambakkam lake on Monday. Sriperumbudur and Pallipakkam tanks are another source of water for the lake. The officials have made it sure that the tanks have been receiving only marginal rainfall.

On Monday, a fake news surfaced saying that the water of Chembarambakkam is going to be released in the night. People living in flood prone areas including Saidapet, Jafferkhanpet, Kotturpuram, Adyar and Nandhanam among others recalled the flood of 2015.

People shared the horrific incident which they experienced in the year 2015 and requested government not to repeat it again. Chennai was officially declared a disaster area on the evening of 2 December of 2015. At the MIOT Hospital, 14 patients died after power and oxygen supplies failed. Chennai Corporation officials reported at least 57,000 homes in the city had suffered structural damage, mostly those of working class. People struggled for 4 longs days without water and food. Many lost their valuables due to the neck deep water that gushed all of a sudden around 10 AM in the morning.