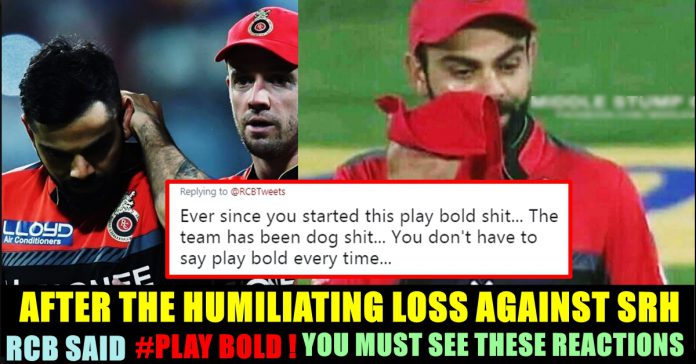 Virat Kohli was understandably disappointed after Royal Challengers Bangalore crashed to a 118-run defeat against Sunrisers Hyderabad in the 2019 Indian Premier League. RCB have now lost all their three matches this season and sit bottom of the table.

Jonny Bairstow (114) and David Warner (100 not out) added a record 185 for the opening wicket as Sunrisers Hyderabad set RCB a massive 232. Virat Kohli and AB de Villiers had to lead the charge for Bangalore but when both men were dismissed before the 7th over had been bowled out, it was end-game for RCB. 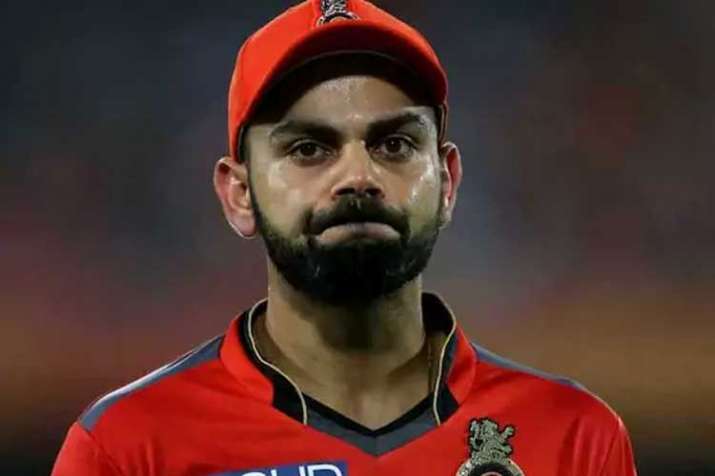 At one stage, RCB were in danger of crashing to the worst ever defeat in IPL history.

Royal Challengers Bangalore had reached the final in 2016 on the back of Virat Kohli’s record-breaking 973 runs and some magic from AB de Villiers. The team struggled in 2017 and 2018 and this year, things have just continued to go downhill.

Virat Kohli, on Sunday, conceded RCB were outplayed in all departments of the game. Sunrisers Hyderabad batted much better and Mohammad Nabi’s spell of 4 overs where he snared 4 for 11, rattled the Royal Challengers completely. “(It was) probably our worst loss ever,” Kohli told the broadcasters after the match. “Difficult one to explain. We were outplayed in all departments by a quality side.

“This showed why they are former champions and finalists. We could have tried different things, like bouncers. They batted really well once they got in,” he said.

As soon as the brutal loss, the official twitter handle of RCB posted a tweet saying “113 all out. Lots to ponder about, lots to work on.. Now is when the road gets tougher, but also when the Bold should get going. #VIVOIPL2019 #SRHvRCB”

113 all out. Lots to ponder about, lots to work on.. Now is when the road gets tougher, but also when the Bold should get going. #VIVOIPL2019 #SRHvRCB

This tweet from them received hilarious troll from the twitter users. Check out some of them here :

Rcb inning was total joke , literally no player seems to play with passion or looks like they just wanna to end this go home and get their money . I’m ashamed to be an RCB supporter 😐

Enough of enough.! No kannadigas in team.! Look at them performing, karnataka is a place of champions, but sadly no one in team.! Remove the players who underperform irrespective of their big name.!

The only way “RCB” can LIFT the trophy is to change their name to “JCB” ..
One has to feel for @imVkohli though..

How many times you will break our trust.literally never gonna watch ipl and rcb playing again💔😭😭😭😭

You people r taking fans for granted….no passion at all . It feels like u just want your chunk of money. Please don’t ruin d name of Bengaluru..🙏🙏.

This is Worst team in IPL history..

What do you think on these hilarious reactions?? Comment your views below !!

Previous articleFor The First Time Murali Vijay Talks About His Friendship With Actor Jeeva !! WATCH !!
Next article“Vijay Sethupathi Must Be Arrested !!” Real Transgenders Demands Arrest For The Actor For False Portrayal !!

If he played with a strike rate of just 100 in the 10 balls he faced, Chennai Super Kings would have easily won the...

The National awards for the films that were released in the year 2019 has been announced today. South Indian cinema has got highly recognised...