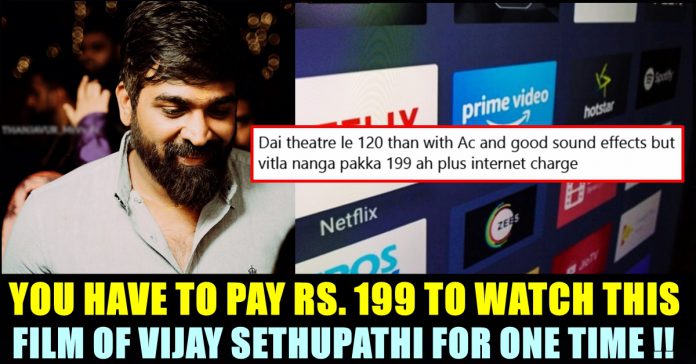 Aishwarya Rajesh and Vijay Sethupathi’s “Kanavar Peyar Ranasingam” will be getting a direct online release on pay per view portal Zee Plex. The film is planned to release on 2nd of October and is announced that it will be available for Rs. 199 per view fir the audience. It is going to be released in 150 countries across the world.

Confirmed: #KaPaeRanasingam premiering with pay per view method on ZeePlex for Rs.199. pic.twitter.com/ESNaPDM9pO

As soon as the new surfaced, netizens have been flooding mostly negative comments, saying that the price that has been finalized is too high. Many people saying that they would watch a film in theatres for just Rs.120 Rs with air conditioning facility and with good sound effects.

#OTT premiere charges of Rs.199/- is too expensive for any film. Our audience are prepared for only free content through subscription. The moment payment comes, they will watch only if it's an exciting & unavoidable film. Let's see how this new pricing strategy works for a film🙄

Can’t even think how VJS accepted such a worst move😒😒

However, a set of people are feeling happy on seeing the price as they could watch the film with their family for just Rs.199. They felt that the money they would spend while going to theatres will be saved if this practice continues.

Comment your views on Ka. Pae releasing in pay per view method !!