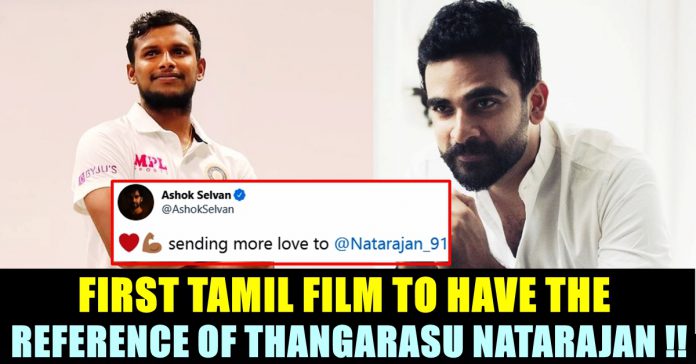 Forget the achievements he is going to make in the future, Thangarasu Natarajan’s journey to make a place in the Indian cricket team is itself worth a biography picture is what all we fans from Tamil nadu feel. As a first step to the massive destination, makers of Ashok Selvan’s next have decided to keep a small reference of the 29 year old pacer in their film. Comedy actor Sathish who is also a part of the upcoming flick, proudly shared the picture in his official twitter account and expressed his happiness to the fans.

Thangarasu Natarajan became an irreplaceable assert of team India as he proved himself in the 4 matches he played in the Australian tour. The left arm pacer from Salem, Tamil nadu has grabbed a separate place in the team through his outstanding performance in the T20 series. He picked 6 wickets in the three matches he played with an economy below 7 runs per over which impressed critics and fans. Now, as Bumrah got ruled out from the ongoing test series due to injury, Natarajan is highly expected to make his test debut through the fourth and final test against Australia. It is notable that Nattu got selected in Indian test squad only as a net bowler.

Cricket experts and fans highly believe that Natarajan is an excellent find of this year’s IPL and comparing him with the legendary left hand seamer of India, Zaheer Khan. Nattu is expected to replace him by improving his abilities. Natarajan who came from a poor background, is finally seeing the light of the day only through his sheer hard work.

Comedy actor Sathish who never missed to express his admiration towards Natarajan, came up with a post in his official Twitter account, revealing that Natarajan is going to feature in an upcoming Tamil film in which he is a part. Posters of the Sunrisers Hyderabad bowler were used in the film’s hostel room scene. On seeing the reference of his favourite cricketer, Sathish got overwhelmed and shared his experience.

Sathish said that he feels extremely proud to see two posters of Natarajan in a hostel room scene and remembered how such scenes were made by having the posters of Sachin, Dhoni and Kohli. “To the days where we saw posters of Sachin, Dhoni and Kohli adorning hostel walls on a film set, to now seeing Natarajan poster at the same place today. Super proud to see how far you’ve come bro! And super kicked about this new project with Ashok Selvan and Priya” read the tweet of Sathish.

To the days where we saw posters of Sachin, Dhoni and Kohli adorning hostel walls on a film set, to now seeing @Natarajan_91 poster at the same place today. Super proud to see how far you’ve come bro!
And super kicked about this new project with @ashokselvan @priyabhavanishankar pic.twitter.com/6eMxGdq3ku

Ashok Selvan who is playing the lead role in the film which is tentati9vely titled as “Production No.8”, shared the tweet of Sathish and said “sending more love to Natarajan”

With many more references and connotations to come, Ashok’s next officially became the first film to have the reference of the yorker specialist. Natarajan who belongs to Chinnappampatti of Salem, is 29 years old now. His father is a Saree weaver and his Mother ran a road side shop where people fell in love with her beef fry. He was the eldest of his five siblings. In the year 2011, Natarajan came to Chennai from Chinnappampatti to pursue his cricketing career.

Previous article“Stop Tagging Me” – VJ Parvathy Replied To Netizens !! WATCH
Next articleHow Is “Master” ?? Check Out The Review & Reactions