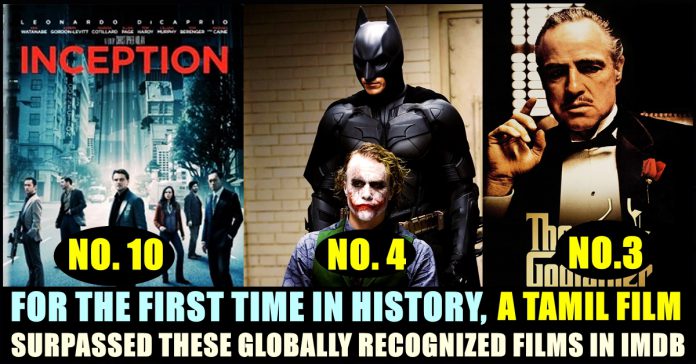 Ever since we became aware of the movie rating site Internet Movie Database or IMDB, The Shawshank Redemption of Frank Darabont is the film that topped the list followed by films such as God Father, Dark Knight, 12 Angry Men etc. The entire 250 films list wouldn’t have one tamil film and the few Indian films that could be seen in the list are Aamir Khan’s 3 idiots, Taare Zameen Par, Lagaan, Dangaal. Gangs of Wasseypur, Andhadhun are the only non-Aamir films that took place in the IMDb top 250 films that contains cut films like Pulp Fiction, Unforgiven etc.

Now, for the first time, a Tamil film topped the list, sending The Shawshank Redemption to the second place. Yes, Jai Bhim of actor Suriya which released on 5th of November grabbed the first spot with 53,000 plus votes. IMDb ranks films based on the votes they are receiving from the audience. Though “The Shawshank Redemption” received 24 lakh votes so far from fans all these years, “Jai Bhim”, within 10 days of its release time went to the top spot, due to the problem it discussed and the fan base of the lead actor.

Surprisingly, the film grabbed the spot above the likes of Inception, Schindler’s list, Pulp Fiction, The 12 Angry Men, The God Father and other globally recognized films. Check how fans are reaction to the feat of “Jai Bhim” in Internet :

The film, based on the 1993 Cuddalore incident, received a rating of 9.8 on IMDB! Congrats to the team.#JaiBhim is a masterpiece. More power to south cinema.✊🏻#JaiBhimOnPrime @prakashraaj

Forty two year old pan Indian actor Siddharth replied to an online fan who trolled him based on his age during a discussion on...

Raju who became the winner of Bigg Boss season 5 started appearing for youtube interviews. The upcoming star who is currently spending his 7...