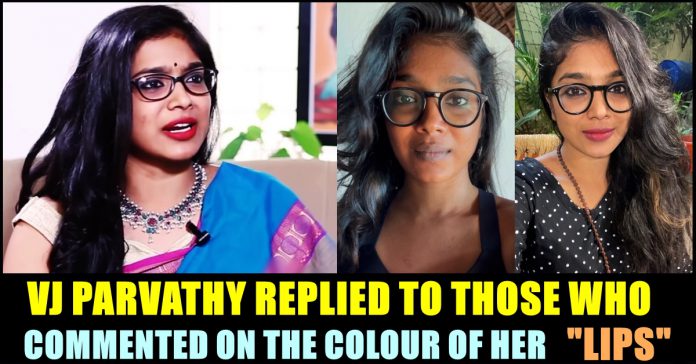 First Post Of VJ Parvathy After Getting Evicted From “Survivors” Show !!

VJ Parvathy of youtube fame who got evicted from the reality game show “Survivors”, released a video sharing a glimpse of her looks post “Survivors”. In the video, the budding actress said that many people think that her lips are darker due to her “smoking” habit. Brushing off such speculations, Parvathy said that her lips look that way naturally and informed her followers about getting it treated. She also came up with a “Before-After” post in her official twitter handle, boasting her pre-survivors look and post-survivors look.

Among Vijayalakshmi, Parvathy and Gayathri, the “Sivakumarin Pondatti” actress got evicted after she failed to perform the eliminator task successfully. The eliminator task demanded the contestants to push a ball and arrange the word “Survivor” from the puzzle in a pin table set up and a puzzle with blocks set up. When the host Arjun gave the contestants an extra minute to assemble the same, Gayathri managed to complete the task but VJ Parvathy failed. She wished good luck to her co-contestants while hetting eliminated.

The show is all about having the contestants stranded in an isolated place. They are expected to perform highly risky tasks which they will have to win in order to gain food, water and other essentials to survive in the island. VJ Parvathy grabbed a considerable amount of screen space, despite of the participation of some of the known cinema celebrities. Now, after getting evicted, she came up with a number of posts in her social media handles.

“The Pain is real. The Tan is Real. I’m a survivor. Learning. Unlearning. Relearning. Thank You for everything.” Parvathy said in her post by sharing a couple of selfie pictures of herself posing before participating in “Survivors” show and after participating in the same show. Check out her post below :

The Pain is real. The Tan is Real. I’m a survivor ☯️☮️

Thank You for everything. pic.twitter.com/0k0au168UU

In a video Parvtahy shared in her Instagram space, Paravtathy opened on how people are wrongly speculating about her lips getting darker because of her smoking habit. “So, that’s how I am after “Survivors”, I never expected my face to become this tanner after the show” she said in her video. “I cannot believe” she screamed. “Many say that my lips looks dark in colour because of my smoking habit. But it is my natural colour. Have to get treatment for it” she could be seen saying in the video.

Watch her video below :