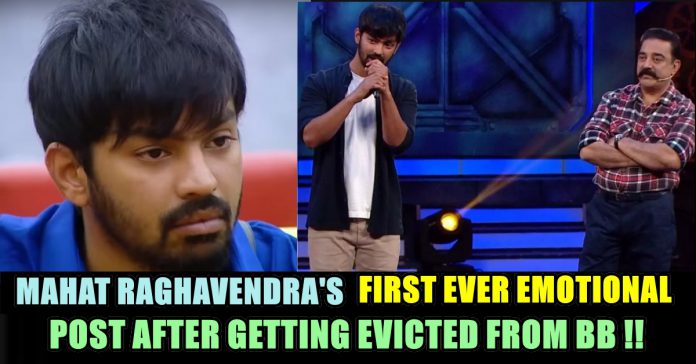 Yashika and Aishwarya both hugged him with tears rolling down her tears. After Mahat left they both went inside the smoking room and Yashika broke into tears. She cried for a long time and Aishwarya tried to console her. Mumtaz tried to knock the door and her hesitation stopped her from knocking it.

Now after eviction Mahat posted his first tweet and attached an Instagram video with it. He seemed very emotional where he wrote “Thank you for all the love , support and understanding me #Repost mahatraghavendra with get_repost ・・・ Such an emotional Kurumpadam. will post the original soon”

Thank you for all the love , support and understanding me 🙏🏻❤️#Repost mahatraghavendra with get_repost
・・・
Such an emotional Kurumpadam😭😭😭😭😭😭😭💕💕💕💕 will post the original soon❤️❤️… https://t.co/K2CuBuJhEO

Thank you for all the love , support and understanding me 🙏🏻❤️ #Repost @mahatraghavendra with @get_repost ・・・ Such an emotional Kurumpadam😭😭😭😭😭😭😭💕💕💕💕 will post the original soon❤️❤️ @mahatofficial seriously love you more than anyone in the whole world💕💕🔥🔥 @mishraprachi ❤️

Here’s the response from his followers :

Sorry to say , we can forgive you but won’t forgotten what you have done for other housemates !! Hope you realize your mistakes & don’t make the same faults again . Tc bruhhh 💪🏻😊 #BiggBossTamil2 #BiggBoss2Tamil #BiggBossTamil #Riythvika

Agree! he’s a victim of plotting n scheming, a scapegoat though. But he also has to improve his character!

This is the support we given for you. More than anger u cheated one girl #misraprachi. Even though it is your personal we can’t accept pic.twitter.com/KMr2tjqEGt