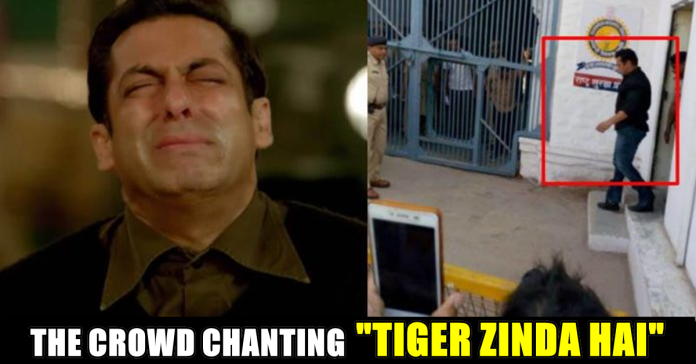 First Pics Of Salman Going To Jail Are Out : Check Out What Fans Are Doing Infront Of The Jail !!

Yesterday , the Jodhpur Court convicted Salman Khan in the blackbuck poaching case which dates back to 2nd October 1998. The actor has been sentenced to five years jail in the 1988 case. “Tarik pe tarik”, yeah that’s how much time the Indian justice system takes to decide their verdict. The other four actors who were the co-accused – Sonali Bendre, Saif Ali Khan, Tabu, and Neelam – were acquitted of all charges.

Understanding Salman Khan can be tough. Of course, the man is a great entertainer who has given us some great movies but at the same time, he is a habitual offender. Often involved in a string of criminal offenses, Salman, court cases and jail go a long way.

His fans across the country were left heartbroken after a Jodhpur court sentenced the Bollywood star to five years in jail in the much awaited verdict of the blackbuck poaching case.

Salman, dressed in black shirt and dark blue denim jeans, eyes hidden behind black shades, was welcomed by a sea of fans as he made his way to court for the verdict. The fans cried in disbelieve after the court announced Salman guilty of killing two blackbucks in Kankani village in Jodhpur.

Chanting “Tiger Zinda Hai”, the crowd pushed and screamed as they waited to catch a glimpse of their star before he was taken to the prison. “Injustice has been done,” yelled a young fan in anger while the chants continued.

Disappointed by the verdict, the crowd of young fans that stood outside court as the actor was taken away, asked what was judiciary system doing for almost 20 years? “Salman is our bhai. There’s politics involved. It’s been almost 20 years to the incident and after so long, it’s not fair to give him 5 years in jail,” said another disheartened fan.

With Salman given 5 years in jail, a lot of his projects that were riding on his shoulders, are now on hold. But his fans have hope. “He will come out. Salman has to finish Race 3!” a voice shouted from the crowd. Apart from jail time, Salman has also been slapped with a fine of Rs 10,000. Since his punishment exceeds three years, the actor will now have to approach a higher court in order to get bail, meaning he will have to spend the night in jail. Following the sentencing, Salman Khan was taken into custody by the police inside the court premises in Jodhpur. An arrest warrant has already been prepared and the actor has been sent to the Jodhpur Central Jail.

His lawyers are applying for bail, but it might take some time. The actor might have to spend 1 night in Jodhpur Central Jail.

Salman has been taken into custody and has reached the jail. First pics of Salman going to jail are leaked and you can’t miss them.

Previous article10 Things You Don’t Know About Heath Ledger “The Joker” !!
Next articleAmazon and Flipkart Are In Danger : Big Mobile Companies Accused Them For This Reason !! : Check Out