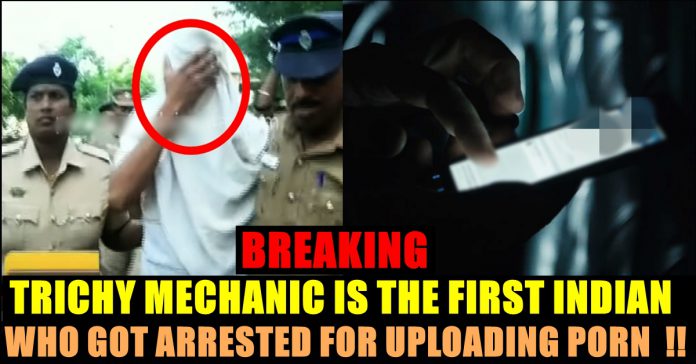 Christopher Alphonse Raj, a 42 year old AC Mechanic from Trichy got arrested by Police officers for uploading obscene videos in online which featured children. After arresting him, Police officers produced him in Trichy Mahila court. Followed by his arrest, it has been reported that there are 3000 fake accounts in India which uploads obscene videos of children.

Christopher reportedly uploaded such videos through fake accounts which were named as Aadhavan, Nilavan etc. Tamilnadu Police officers who earlier announced that people who are involved in uploading or downloading obscene videos related to children will be punished, found Christopher living in Trichy, Palakarai.

He was booked under 5 various sections in POCSO act and is expected to get 15 days of police custody. Police officers are expected to investigate him more regarding the crime. Being an AC Mechanic, Christopher completed his studies in Industrial training institute. He has been involved in uploading such videos for past one year and he consider it as his only hobby, according to Puthiya Thalaimurai. It is notable that Christopher is the first person to get arrested for committing such crime in India.

Watch the video of him getting arrested here :

In a recent interview with Behindwoods, the police officer explained the process of catching the culprits in detail. “Child pornography is illegal across the world. No website in this world contains such videos as of now. But few miscreants are manufacturing such kind of videos and spreading it. To stop them from involving in such violence, we are gathering their details from ministry of home affairs in order to take appropriate action against them” said the Mr. Ravi, IPS officer.

The officer further said that he got shocked and astonished to know about the state of Tamilnadu and Chennai. “On seeing the contents they have watched, we became so emotional. In a state like Tamilnadu which is known for its culture, we couldn’t believe that they have searched for that content. We even have the list of the videos watched by every individual” he said in the interview.

Telangana based badminton champion PV Sindhu shook her legs for a Tamil song and won the hearts of many Tamil nadu based online fans...

Tracker Said That The Look Of “Thalaivi” Is Stunning !! Actress Reacts !!

“Planting Tree In Your Own Villa Is Not Social Concern” – Vivekh Replied To The Criticism Faced By Vijay !!

As soon as Vijay uploaded the pictures of himself planting the sapling in his house to complete the challenge of Telugu Superstar Mahesh Babu,...