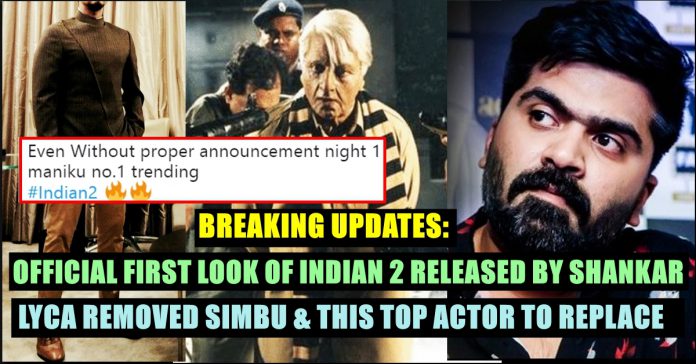 Dhiwaharan
January 15, 2019
Share
Facebook
Twitter
Pinterest
WhatsApp
Kamal Haasan has treated his fans with varieties of iconic roles and it’s difficult to choose the best out of them. One of the most popular and kickass roles played the evergreen actor was Senapathy in Shankar’s 1996 directorial titled Indian. In the film, he played both father and son, but it was the latter one which left an impressive mark on everyone. With fantastic performance and perfect makeup of an old-aged man, Kamal was bestowed with National Film Award in Best Actor category.
[wp_ad_camp_1]
Now after two decades, the sequel to the film has been announced and is titled Indian 2. The second part will also be directed by Shankar and is set to go on floors on January 18, 2019. Today, on the occasion of Pongal, Shankar took to his Twitter page and shared the first look of Kamal from the film. In the poster, Kamal is seen in Senapathy’s look and is doing the iconic gesture by which he attacked people in the 1996 film. Shankar tweeted the poster stating, “#indian2 Hi everyone! “ Happy Pongal”

As soon as the poster was released by the director Internet users could not stop talking about it. At the time of 1 o clock in the midnight the hashtag Indian 2 reached the first place. Check out some of their reactions here :

Dear TL, calm down and enjoy this awesome first look poster of #Indian2. @shankarshanmugh is back. pic.twitter.com/A6Ac5tlChh

#Indian back in 1996 created such a havoc in Kerala Box Office that it was unthinkable even for a film like #Padayappa which broke BO myths everywhere else.Enough statement to summarize what #Senapathi is for Kerala audience..? Bring it Onnn…!😎#Indian2 pic.twitter.com/9OD5nuN0ma

This is a crazy first look poster of #Indian2.

What does it mean:

As cited earlier, @anirudhofficial will do the music for @shankarshanmugh ‘s #Indian2

Buddy, you are literally going places.

All Hollywood stunt directors (peter hein one of them)😍😍🔥🔥
Stunts therikapodhu😎😎🔥🔥#Indian2 pic.twitter.com/lgPhwGLBfs

Even Without proper announcement night 1 maniku no.1 trending #Indian2 🔥🔥 pic.twitter.com/zRt4MBtkap

In the pre-independence portion in #Indian2, @ikamalhaasan will appear younger. Different from Part 1, this story will focus on the origin of financial crimes in India. @iamAmyJackson being considered for special cameo role during this flashback scene. @shankarshanmugh pic.twitter.com/dFNflDJk2d

The happy news sent the fans of STR into a frenzy as their star was going through a tough time for the past few years. However, it looks like their happiness is only short-lived since the industry is abuzz with reports that Simbu is no more in the project. He was supposed to do the  grandson role of Kamal Haasan. According to a report published by a popular Tamil daily Samayam, Simbu has been removed from the project by Lyca Productions. Lyca Production which is now producing Simbu’s Vandha Rajavathan varuven has reportedly found that the actor did not cooperated properly during the shoot which led them to remove Simbu from the project. Shankar accepted to it without uttering a word it is said in the report of Samayam.

Now, actor Siddharth is reportedly signed in to replace Simbu in the big-budget film. Siddharth is now awaiting for the release of his upcoming film “Aruvam”. The actor also discussed to his twitter followers about doing the Tamil remake of bollywood blockbuster “Andhadhun”.

Previous articleThis Popular Actress & Hardik Pandya’s Rumoured Ex-Girlfriend Thrashed Him For His “Absurd” Comment On Girls !!
Next article15 Posts That Proves “Vintage” Dhoni Is Back !! You Just Can’t Miss These !!

A couple walks out of a hospital, casually chatting with each other, while another woman walks close to them. As the couple reach the...

The Prime Minister Narendra Modi-led Bharatiya Janata Party (BJP) recorded a humongous victory with over 300 seats at the Lok Sabha Elections 2019. After...

CWC Fame Dharsha Gupta Reacted To A Follower Who Made A Comment On Her “Hot Pic” !!

Dharsha Gupta of "Cooku with Comali" who made her silver screen debut with director Mohan G's "RuthraThaandavam", on 7th of June, celebrated her birthday...