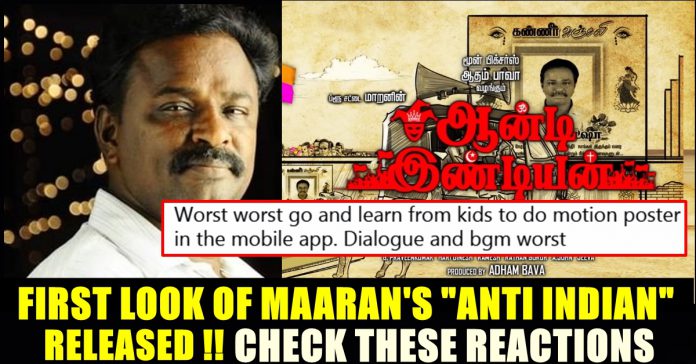 The most awaited first look motion poster of Blue Satta Maaran’s debut film “Anti Indian” got released in Internet on Friday. It was released in the youtube channel “Tamil Talkies” which belongs to the debutant himself. He who rose to fame among Tamil cinema audience through reviewing movies, has also composed music for the film, according to the posted that got released. The film which caught in controversy even before release due to censor issues, promised a political satire through the poster.

In his recent reviews, Maaran has been updating about his debut directorial which is titled as “Anti Indian”. He said that the film got completed and he is about to send the movie to censor board in order to get certified. Couple of days later, a report surfaced saying that the film got banned by the censor board for its content.

After Censor Board refused his film, Maaran came up with a tweet in his official twitter account saying that he has approached the revising committee for reconsideration and assured that his film will get released at appropriate time. Now, he has released the first look motion of the poster in his youtube channel. Produced by Adhan Bava, the poster starts with the caricatured version of a death procession with people of all the religions participating in it.

“Kanneer Anjali” (posters made to pay tribute for the deceased) posters of E. Badshah, played by Maaran could be seen pasted on the wall with a political party actively involved in campaigning. When the campaigner promises to provide endless amount of milk and honey, a man who is drunk asks “What about booze”. Title “Anti Indian” appears with a monkey sitting on a throne which is placed on a grave. Monkey could be seen donning a “saffron” colour robe around its neck.

Watch the poster below :

Various kind of reactions from the audience are surfacing in the Internet since the poster’s release. While a set of people criticizing it for the way he criticized other movies in the past, many expressed their curiosity over what the film is going to convey to the audience.

Worst worst go and learn from kids to do motion poster in the mobile app. Dialogue and bgm worst

BIGG BOSS Title Winner Riythvika’s Angry Response To Those Who Searched For Her “Caste” !! Check Reactions !!

Initially, Riythvika was up for elimination on the reality TV show BIGG BOSS on the first week of the season. She had then said...

H.Raja, National secretary of BJP party has came up with a tweet slamming Kamal Haasan for one of his statement regarding Thyagayyar during a...

In a shocking case reported from Tamil Nadu, a 19-year-old man was allegedly murdered by his friends due to his closeness with a mutual...