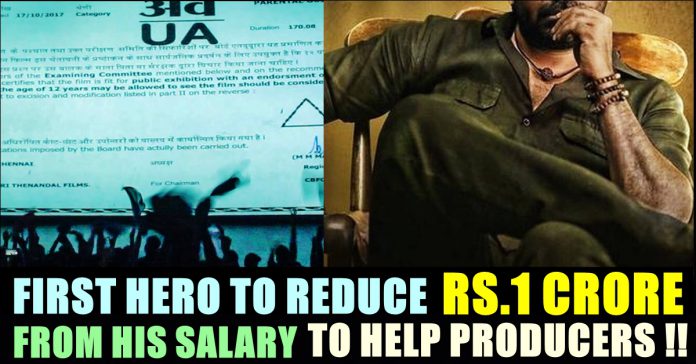 As lockdown got extended for third consecutive time in India due to coronavirus which killed two lakh and fifty thousand people across the world, many industries finding ways to be productive for survival. Daily labours, Industrialists, Entrepreneurs and people working in almost every field are suffering financially due to the Corona outbreak. Tamil Film industry is no exception as production of all the movies got interrupted.

Many actors came forward to help the workers of FEFSI and government financially. Raghava Lawrence donated Rs. 3 crores to fight corona virus and is still donating in various ways. Actor Vijay donated Rs. 1.30 crores whereas actor Ajith donated 1.25 crores. Now, for the first time an actor came forward to help the producers of his upcoming films by reducing his salary due to this corona issue which stopped production for nearly 2 months as of now.

Vijay Antony who got introduced in Tamil film industry as music director, went to to act in films which became blockbusters. Now, he happened to be the first actor to officially announce regarding his “voluntary salary reduction support”. Vijay Antony is known for acting in films such as “Pichaikaaran”, “Thimuru Pudichavan”, “Naan”, “Kolaigaran” and many more. He who is busy in acting films temporarily stopped composing music for other actors.

The press release regarding his gesture said that the actor is currently acting in three films Tamizharasan, Agni Siragugal, Khaki produced by FEFSI Shiva, Amma creations T. Shiva, Open theatre and infinity ventures respectively. All the three films are gearing up for theatrical release post lockdown it seems.

Considering the loss incurred by Coronavirus, Vijay Antony has decided to reduce 25% of his salary for all the three films which is Rs. 1 crore for each film according to a popular cinema tracker Kaushik. By doing this, Vijay Antony believes that he could help his producers for a smooth release once the lockdown is lifted.

Amma creations T.Siva who is known for producing several films in Kollywood, appreciated this gesture of Vijay Antony and requested other actors and technicians to come forward to help producers by reducing their salaries. He said that other two producers who also welcomed Vijay’s “volintary salary reduction support” whole heartedly.

Hatsoff to @vijayantony for his timely, courteous decision to substantially reduce his salary by ₹ 1 crore per film, for his upcoming three films 👌👍

This decision of Vijay Antony is expected to make a huge change in the salaries received by top heroes such as Rajinikanth, Vijay, Ajith etc. Comment your views on this gesture of the actor !!