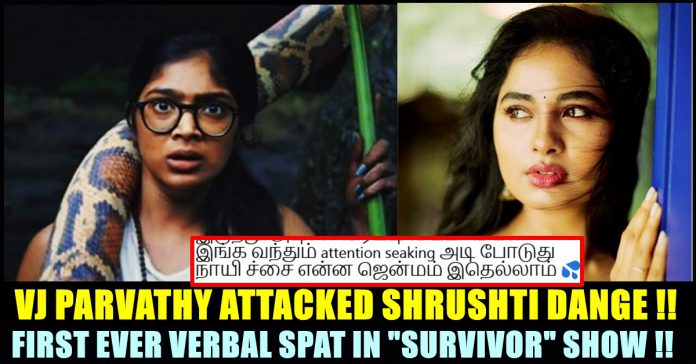 The most awaited reality game show “Survivor” got inaugurated recently with action king Arjun hosting the show. Some of the popular faces such as Vikranth, Nandaa, Lakshmi Priyaa Chandramouli, Besant Ravi, Shrusti Dange, Vijayalakshmi, Saran Shakthi took part in the show as participants. The show is slated to be aired on Zee Tamil during 9 : 30 PM from Monday to Friday. The 14 contestants who took part are aiming to win the prize money of Rs. 1 crore. Now, the first ever verbal spat had took place between two female contestants and the promo of it started gaining attention from the audience.

Meanwhile, a recent promo showed VJ Parvathy, one of the contestants confronting actress Shrusti Dange for laughing when she slipped. The Bigg Boss like promo has grabbed the attention of the online users who started reacting to it by supporting either. “I felt I got demeaned by her” says Parvathi during the start of the promo.

“One will slip while running, it’s normal” says Parvathy to which actress Shrusti who is known for the hit song “Putham Puthu Kaalai” replies saying that she laughed in a friendly manner. “I don’t like it and I don’t want it to happen in my back” Parvathi replies back in her face. Shrusti stumbles to explain herself and Parvathi asks “So you can’t see that I am getting hurt. So you will keep laughing when a person falls and something happens to them”

Two set of Internet users came in to rescue their favourites. Many could be seen comparing Parvathy with Julie of Bigg Boss season one. Check out some of the reactions below :

Ennamaa idhukellaam kovapadra.. it’s natural for people to laugh when someone falls comically. She wasn’t teasing, just laughing. Ellaarum sirichirukom.. at this pace of picking up fights, you might be the one getting voted out by your team #SurvivorTamil

She is perfect contestant for BB

Previous articleVideo Recording Of A Teen Using “Swear Words” To His Teacher Irked Internet !!
Next articleVideo Of Manimegalai Getting Emotional While Buying Her First BMW! Watch!!

Former Chennai Super Kings Player and current commentator Badrinath came up with a tweet describing the current status of Mumbai Indians in the ongoing...