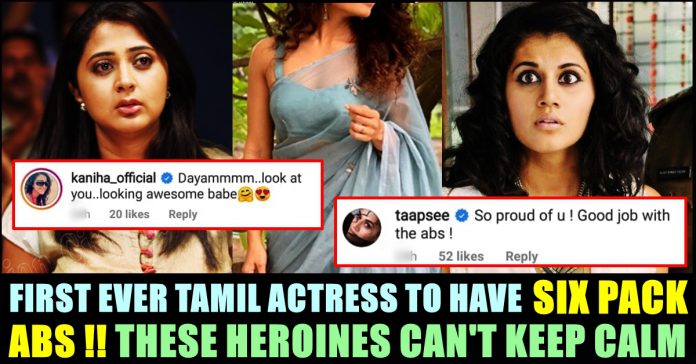 The very term “Six Pack” emerged among Tamil speaking youngsters only after the arrival of Gautham Menon’s Vaaranam Aayiram. In the film, protagonist Surya who faces a love failure would rebuild himself by hitting the gym. This inspired many youngsters to join gym and to build abs in their bodies. Not only youngsters, many heroes of Tamil cinema started to work on their abs as a result of which Vishal, Bharath, Atharvaa, Jai, Arya, Dhanush, Simbu, Arun Vijay appeared onscreen with six pack abs.

Now, most probably for the first time, an actress who worked in Tamil film industry has worked on her six pack abs and posted her pictures in social media only to get lauded by her fellow social media users and actresses. Pooja Ramachandran is known among Tamil Tv audience for the shows she hosted in a music channel called as SS Music. She made her cinema debut through Karthick Subbaraj’s Pizza in which she acted as a Pizza receiving lady.

Followed by that, she continued to appear in films like “Kaadhalil Sodhappuvathu Eppadi”, “Nanban”, “Nanbendaa”, “Kanchana 2” etc. Pooja is one of the many actresses who are very much active in social media platforms. In Instagram she enjoys more than 2 lakh followers where she uploaded her pictures with Six packs.

Adding those pictures, Pooja thanked her boyfriend for giving a beautiful experience in the sea. “Dance with the waves, move with the sea. Let the rhythm of the water set your soul free.” . she wrote as a caption to her post and said that she never enjoyed this much before in the sea.

Check out the pictures of Pooja with her abs :

“Dance with the waves, move with the sea. Let the rhythm of the water set your soul free.” . Never ever have I enjoyed the sea more than this trip! The ocean life is just unbelievable! The colours, the beauty, the fish, and nature! UNBELIEVABLE! Maldives you are just such a beautiful part of this world! 🧜🏼‍♀️♥️🐙🐡🐠🐟🐬🐳🐋🦈🦀🦞🦐🦑 . Thank you my love @highonkokken for giving me one of the most beautiful experiences of my life! #seagirl #waterbaby #oceanlife #planetearth #lifetime #waterislife #maldivesislands #girlwithatattoo #beachgirl #traveltheworld #speedboat #bikinikindoflife👙 #sunshine

On seeing these pictures of Pooja, renowned actresses such as Taapsee, Kaniha lauded her for her appearance. “So proud of u ! Good job with the abs !” wrote Tapsee to appreciate Pooja whereas Kaniha wrote “Dayammmm..look at you..looking awesome babe”

Check out the screenshot if their comments and Pooja’s replies to them below :

Many others lauded the actress for her effort on bringing a six pack abs :

Pooja ramachandran is also known for appearing in the Bigg Boss Telugu version. The actress got married to VJ Craig of SS Music in January 2010, but divorced him in 2017. She married actor John Kokken on 15 April 2019 and is leading a successful life.

Velupillai Prabhakaran is one of the greatest Tamil leaders who had started Liberation Tigers of Tamil Eelam organization to create an Independent Tamil state...