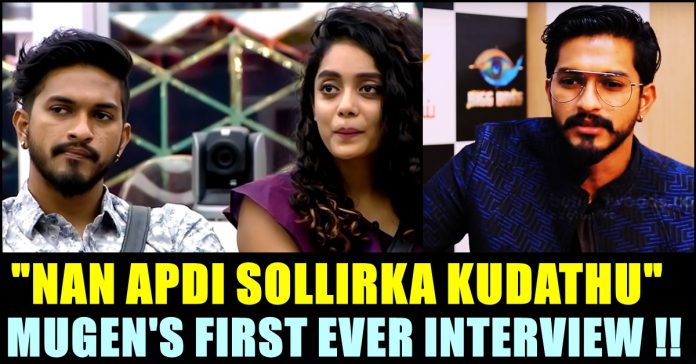 Mugen Rao, the Malaysian based singer and model, appeared in his first ever interview. Wishes are pouring from across the world for Mugen as won the title of Bigg Boss season 3. He broke the stereotype and became the first contestant to win the title after winning ticket to finale task. In previous season, Snehan and Janani failed to hold the trophy after winning ticket to finale.

Mugen won the title by a big margin of 2 crore votes. Sandy who became the runner up lost to Mugen as he managed to gain only 5 crore votes, where as Mugen earned 7 crore votes of Bigg Boss audience.

In this video interview, Mugen shared many things that happened for him inside the Bigg Boss house. He said that he became a person with full of positivity only after meeting friends who spread positive energy to him. “I want to be an inspiration. To be be an inspiration one should respect himself first.” says Mugen Rao in this interview.

The aspiring singer says that he regrets for saying “Anbu Ondru Thaan Anathai” ( Love is alone) while being inside the house. “But after coming out of the house, I realized that Love is not alone. I said those words in a different perspective” he said.

Originated from Malaysia, the singer and aspiring actor has already gained a separate fan following in Tamilnadu. Known for his short temper, Mugen lost it couple of times inside the house and both the time he did it infront of Abhirami Venkatachalam, actress of Nerkonda Parvai.

While receiving the award Mugen thanked his family and the fans who voted for him. Mugen is known for his unique skill of singing his own songs in the Bigg Boss house. During the initial episodes, Mugen made an impact inside the house by revealing some of the dark incidents that happened in his childhood.

He said that the repeated quarrels between his parents led him to make bad decisions. He said that he was not mentally stable for few days due to this. He requested every parents who are watching the Bigg Boss show to take care of their children with teary eyes. Now as he won the title, many celebrities and former Bigg Boss contestants are lauding the 24 year old youngster.

Comment your views on the way Mugen handles his victory !!

Previous article“BIGG BOSS SEASON 1 Is The Best” Says This Actress !! Check Out The Reason She States !!
Next articleBIGG BOSS FINAL ISSUE : Madhumitha Moses Demands Explanation From Vijay TV For Misusing Him !! WATCH VIDEO !!

23-year-old Dhansingh Arul, a first class Electrical Engineering graduate has applied for the job of a sweeper at the Tamil Nadu assembly. The engineering...