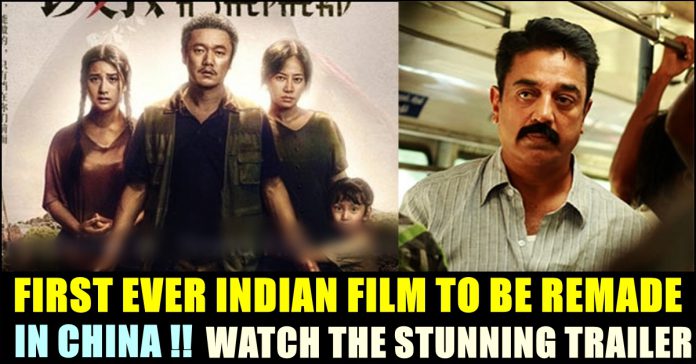 Drishyam, the intense family thriller directed by Jeethu Joseph was remade in many languages including Tamil. Now it became the first ever Indian movie to be remade by a Chinese production house. Trailer of the same released in a title “Sheep without a shepherd” recently and is currently being seen by many Indian fans as they already watched it as “Drishyam, Papanasam and as Drishyam (Hindi).

Drishyam was first remade in Kannada as Drishya by director P. Vaasu. The Telugu version titled Drushyam directed by Sripriya featured Meena reprising her role. Jeethu himself directed the Tamil remake Papanasam. A Hindi remake was also made with the same name in 2015, directed by Nishikant Kamat. All these versions were commercially successful. It was also remade in Sinhala as Dharmayuddhaya, directed by Cheyyar Ravi and produced by MTV Channel under The Capital Maharaja Organisation Limited.

Now the trailer of a remake in Chinese language has been released. The film was directed by Malaysian Sam Quah is expected to release on 20th of December. Watch the trailer here :

The film “Drishyam” made a huge impact not only across film industries of India but also in the society. Additional Director General of Police (ADGP) Senkumar claimed that two people accused of murdering a woman from Nilambur in February 2014 admitted that their methods for disposing of the victim’s body and mobile phone SIM card were influenced by the film. The murder of a young girl in Irinjalakkuda by her father and his mistress was also said to be influenced by Drishyam.

The film “Drishyam” is said to be inspired by The Devotion of Suspect X, a Japanese novel written by Keigo Higashino. Ekta Kapoor, who had purchased the Hindi movie rights of the novel, sent a legal notice to the makers of the film. However, the director clarified, “After Ekta’s legal team sent us the letter, I watched the Japanese film, Suspect X, which is an adaptation of the Japanese novel. There could be similarities between my film and that Japanese film, but my film is neither an adaptation nor a copy. The Japanese film is also about a murder cover-up and hence the allegation. Similarities are quite common in the works of creators and that shouldn’t be made into an issue.” Akira Kurasowa’s Rashomon (1950) was also cited as an inspiration for the film.

Director Jeethu Joseph who directed Drishyam has directed a tamil film “Thambi” featuring actor Karthi and actress Jyothika. This foreign language remake of Drishyam made the fans of Malayalam proud who can be seen in the comment section of the youtube channel’s comment section. Comment your views on the chinese version of Drishyam !!

Previous articleSivakarthikeyan Regrets For Doing This Film In His Career !!
Next articleAkshay Kumar “Liked” A Post Of Students Getting Attacked ?? Check His Clarification !!

Mano, a popular mimicry artist and comedy actor left the film industry in utter shock as he died in a tragic car accident. Being...