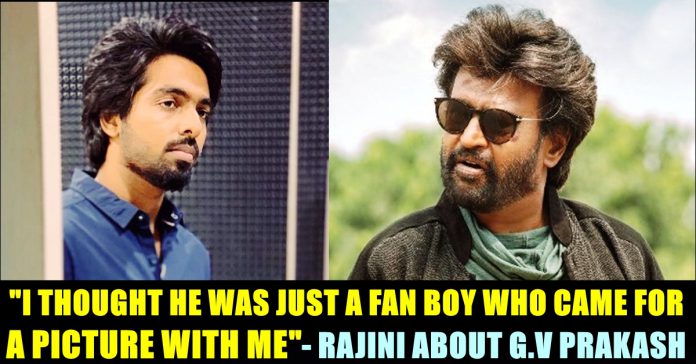 Throughout his 40 year old career, Super star Rajinikanth has worked with many music directors including academy award winner A.R rahman and music maestro Ilayaraaja. The actor who always looked after the technicians of his films, is known for praising them with his whole heart. Now, a 13 year old video of the actor praising budding musician G.V Prakash kumar and narrating the first encounter between himself and the young lad has surfaced in the Internet through Kavithalayaa’s official Facebook page. The video which was captured during the audio launch of “Kuselan” is going viral across the social media platforms.

“Kuselan” is a 2008 released remake film of Malayalam’s “Kadha Parayumbol”. The film contained Super star Rajinikanth, Pasupathi, Meena Vadivelu in the lead roles. The film’s plot revolves around a village barber and his reluctance on meeting his old friend who has became a national figure through cinema industry. It was directed by P. Vaasu and produced by K. Balachander’s “Kavithalayaa productions”. Music was composed by G. V Prakash Kumar.

During the audio launch function of the film, Super star Rajinikanth who is known for his hilarious yet thoughtful narratives during public events, revealed how he met music director G.V Prakash kumar for the first time. The actor, before heaping praise for the immense talent that G.V produces at such young age, said that he initially thought that G. V Prakash is a fan boy and wanted him to get out of the set.

“After hearing the music he composed in “Veyil” I got impressed and inquired to director Shankar about G. V Prakash. Shankar said that G.V is a talented lad who holds all the strengths of A.R Rahman.” Rajinikanth said in the audio launch function. Further, he went on to reveal the first encounter between himself and the young music composter.

“We were shooting for the film in Hyderabad. A young boy was standing near me for a long time. I got pissed off on the assistant directors who are not sending the boy away. I thought he came there to click pictures and asked him whether he wants a photo with me. He said “Yes”. Only after clicking the picture, they said that he is G.V Prakash.” Rajinikanth left the hall in splits.

“He has composed music for the film and you all should hear it. Excellent. He is a combination of Ilayaraaja and A.R Rahman.” Rajinikanth ended his speech by praising him.

G.V Prakash has now became a seasoned musician and impressed audience with his recent work in “Soorarai Pottru”. Meanwhile, Superstar Rajinikanth is currently committed to a project named “Annaththe”, music of which is going to be composed by D. Imman.

As soon as actor Dhanush and filmmaker Aishwarya announced about their divorce through their respective social media accounts, an enormous number of fans has...

This Young & Emerging Actor To Play Ashwin In His Biopic ??