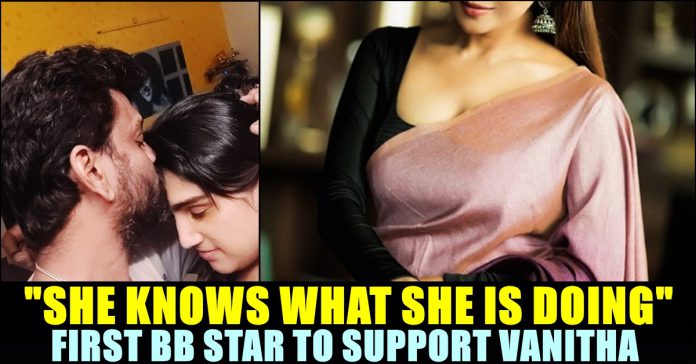 As the decision made by Bigg Boss contestant and actress Vanitha Vijayakumar created controversy among her followers, one of her Bigg Boss housemate came in to support her decision and asked people to stop commenting on her personal life. Vanitha Vijayakumar, married to Peter Paul recently and her marriage which was considered as a progressive move from a 40 year old woman, caught into controversy after Peterl Paul’s legal wife registered a police complaint alleging that her husband married Vanitha before divorcing her legally. This news grabbed wide media attention and people started commenting about it in various ways.

Now, actress, model and former Bigg Boss contestant Sakshi Agarwal appeared in an interaction with a popular youtube channel and said that Vanitha is old enough to make her own decision. “I think marriage is not a public point of discussion. It is her personal life and her personal choice. She can marry whoever she wants and whenever she wants to. We don’t know about the story she (Peter Paul’s first wife) wants to share. We also don’t know what Peter Paul has to say because he doesn’t made a public statement yet. I just think that it is a very personal matter and I don’t like to get involved in it” Sakshi said.

“Vanitha cleary knows what to do and what not to. For her age, no one can betray her or cheat her. This matter will come to an end when people starts writing about it in social media platforms. She is not a second standard baby to take bad decisions. She came through so many things in life and she knows what she is doing.” said Sakshi in her interaction.

Sakshi went on to share about so many other issues including TIK TOK ban in country India. She who supported the decision made by the central government, said that she uninstalled the app, before government’s announcement due to patriotism.

Sakshi did supporting roles in many Tamil films including Kaala and is expected to appear in more films post lockdown. She is currently busy concentrating on her fitness and uploading posts and videos related to that in her official Instagram account. Comment your views on these statements of Sakshi !!

Previous articleTeen Lost Rs.16 Lakh In PUBG Game !!
Next articleTik Tok Made Its Come Back In Style !!

A series of tweets shared by an individual named Karthik about two police officials threatening him and his wife to pay Rs. 3,000 just...