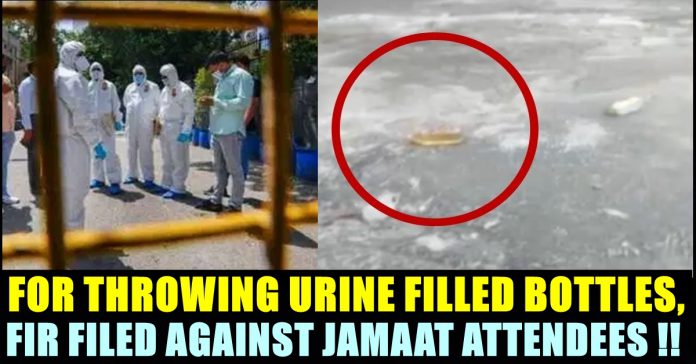 Members associated with Tablighi Jamaat who are quarantined for COVID-19 infection at four flats in Delhi’s Dwarka neighbourhood has been accused of “throwing bottles filled with urine”, after two such bottles recovered from a water dump behind the building. FIR has been filed at the Dwarka North Police station against unknown persons as the bottles were found around 6 pm on Tuesday.

The complaint was filed by the Assistant director of the Quarantine facility in Dwarka’s sector 16B. According to the FIR, the isolated Jamaat attendees have been accused of throwing the bottles to “spread coronavirus among the people”. The act of throwing bottles at the premises of the quarantined facility was recorded by a “Civil Defence Personnel” in his mobile phone, the FIR reported. The First Information Report was filed under sections 269 and 270 of the Indian Penal Code. The probe is on, said Police to the media.

“The intention behind the indecent activity of throwing bottles filled with urine maybe to spread coronavirus among other people” said Delhi Urban Shelter Improvement Board’s Civil Defence Personnel. Last week, Delhi Police had filed yet another case against two members of Tablighi Jamaat for purportedly defecating in front of a room at a quarantine centre in Narela. The accused men are the residents of Uttar Pradesh’s Barabanki.

“A sanitation worker and a Housekeeping Supervisor reported the incident. The individuals residing in the rooms are the suspects for the act, they did not follow the instructions of the health department and government to prevent the spread of the virus. The men put the life of others at risk by jeopardising the entire containment” read the FIR which was filed on Saturday.

It is notable that more than 2300 Tablighi Jamaat members were evacuated from the Markaz building in Delhi’s Nizamuddin area. Out of the 2300, 1810 were quarantined and 536 were taken to hospitals as they started showing symptoms.

Across India, there were 5300 COVID 19 cases reported in which more than 1400 cases have been linked to the religious gathering. States across India are requested to identify the Jamaat attendees in order to isolate them. Tamilnadu is one of the most affected state in this regard. Ministers requested people who attended the meeting to volunteer themselves for testing.

A case has been filed against Tablighi Jamaat’s chief and six others. The chief named as Maulana Muhammad Saad Kandhalvi is a 54 year old Indian Muslim. He is the great grandson of the Tablighi Jamaat founder Muhammad Iliyz Kandhalvi. The latest report said that he is currently under self isolation on the advice of doctors. He has been booked by the Delhi police under the Epidemic Disease Act and the other sections of Indian Penal Code for violating government orders.

“Behave According To Your Age”- Follower’s Harsh Comment Made Anikha To Reply !!

Anikha Surendran, 15 year old child artist who is known among Tamil audience for her appearance in films like "Viswasam", "Ennai Arinthaal", " Naanum...

A particular clipping of a scene from a famous Sun TV serial named "Roja" is trending in the micro blogging social media platform with...