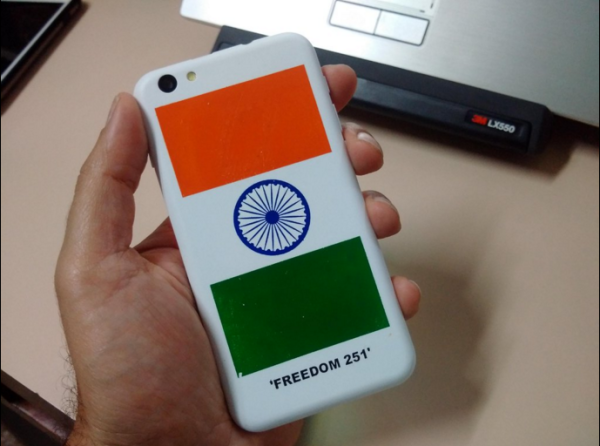 admin
March 25, 2016
Share
Facebook
Twitter
Pinterest
WhatsApp
An FIR has been registered against Ringing Bells, the company behind ‘Freedom 251’. This case is registered based on a complaint by Kirit Somaiya, the BJP MP. President Ashok Chaddha and promoter Mohit Goel have been booked by the police under IPC section 420. The charges put up against them include forgery, cheating and misleading common men, people of India as well as small investors.

Further, the complaint states that Ringing Bells had raised funds and issued a misleading ad in the newspapers, mentioning ‘Make In India’ project of PM Narendra Modi. The ad also had a Tricolor in order to misguide the buyers. Ringing Bells came into limelight last month when it announced Freedom 251, its first product, a smartphone with a price of just Rs. 251. It had received around 7.35 crore pre-bookings for the same.
Immediately, questions were raised about the claims of the company that sold this phone at such low price. Later, it came to be known that the smartphone that was circulated was a re-branded Adcom manufactured phone. Later, the company gave clarifications that the device was proto-type and the original one is on its way.
Even though Ringing Bells had made claims that this phone was under Make In India, later it changed the statement to ‘we would import the first batch from China’. After this controversy, the company claimed to offer refund on these pre-orders. Government had strictly warned the company that strict actions would be taken if it failed on promises.
News Source
Previous article‘Jai Pakistan’ On WhatsApp Chat And Students Were Jailed! Check It Out !
Next articleFacebook Rolls Out A New Feature Which Is Purely Meant For Your Safety! Check It Out!

Varmaa, the Tamil remake of Arjun Reddy which marks the debut of actor Vikram’s son Dhruv, has been rechristened as Adhithya Varma, its makers...

Followed by India's terrific bowling performance against English batsmen in the first innings, a number of former England players came up with tweets blaming...