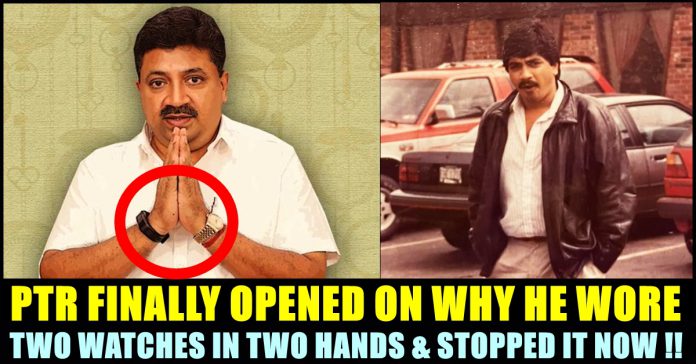 Tamil nadu finance minister Palanivel Thiaga Rajan who has been grabbing headlines through his savage replies in Twitter and for making on point statements about the improvement of the state’s financial status, recently answered to the million dollar question on why he always wears two different wrist watches in his two hands. It is one of the frequently asked questions in social media about PTR and he often got subjected to online troll by the members of opposite parties based this unique habit of him.

When Dhanya Rajendran of The News Minute asked the minister to answer on why he wears two watches, PTR who started with a chuckle, said “It is a difficult question” and went on to reveal the actual reason behind his habit. I think sometime in late 80s or early 90s, my mother found two Rolex watches in a closet. Both were not functioning. One of the watches was from 1940s or 50s and the other one was from 1960s.” said PTR in the interaction.

“I got them repaired when I was in the US. One of them was my grandfather’s and one was my father’s. My father’s was a manual one and I didn’t have the patience to use it and my grand father’s was an automatic one. I wore that in my hand for 20, 30 years to remind me of my grand father and legacy. Over the years, I started wearing fit bands of various brands. Eventually it morphed into this apple watch which contains phone and everything” PTR pointed out the watch he was wearing during the interaction.

“So I kept wearing the Rolex in this hand and started wearing different watches of the advanced technologies in this hand, not for the purpose of watch but to keep a check on my fitness and to use it as a phone. Coincidentally, the Rolex of my grandfather suddenly stopped working. Due to the lockdown, there’s nobody to repair it.” said PTR and added what he told his wife about removing the for the first time in 30 years.

“I was telling my wife I only needed to have that long enough to come back to politics. Now that I’m here, my ancestors live in me and I don’t need to wear that watch. But I haven’t had a chance to repair it. Whenever I get to repair it, I will decided whether to wear it or not” PTR said in the interaction. When Dhanya said that there are rumour doing rounds in Internet saying that he is wearing two watches to see the time in USA and India.

Replying to that, PTR said that there was a time where he was used to know about the time in various markets across the worldwhile running global offshore platforms and added that he doesn’t need it anymore as he need to know the time of Chennai and Madurai now.

Sivakarthikeyan Got Extremely Happy On Seeing This Reply From His Favourite Actor !!

Sivakarthikeyan has became the darling of masses in a very short span of time comparing to other senior actos. Not only the fans, he...