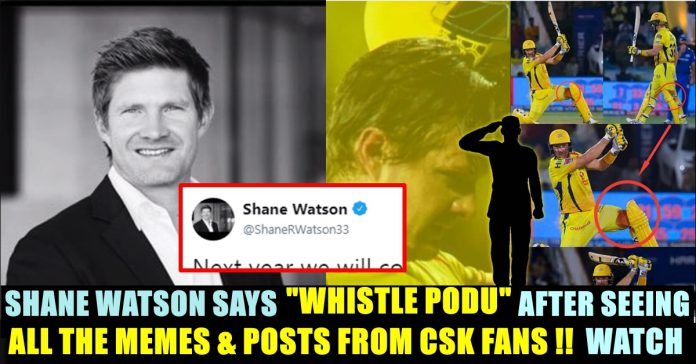 Finally Watson Responds To All The Memes & Posts From The CSK Fans !! WATCH !!

Australia star Shane Watson has been garnering praise from all over for showing remarkable bravery during this year’s Indian Premier League (IPL) final between Chennai Super Kings and Mumbai Indians. The former Australia international literally bled for his side as he tried his best to take the Super Kings over the line. But his heroic effort eventually went in vain as Mumbai Indians went on to win the game by 1 run.

It was all started when Harbhajan singh posted it in his Instagram story which went viral across the nation. Fans of Chennai Super Kings hailed all praise to the Australian veteran through memes and posts after rewatching Watson’s effort in hotstar.

The video of him limping to reach the airport also went viral not only among the fans but also shared by Tamil celebrities such as Director Vignesh Shivan, Kasturi Shankar etc. Watson was on fire in the finals and almost pulled off the chase single-handedly with his innings of 80 off 59 balls for Chennai and batted till the penultimate ball of the match. However, despite this valiant effort, Lasith Malinga bowled a superb last over which saw Mumbai Indians clinch the title by 1 run.

Though it was lost, Chennai fans couldn’t resist lauding the 37 year old legend whose bat did the talking.

Always loved seeing Shane Watson play. That has gone up to another level after knowing what kind of dedication he showed to his team yesterday.With blood flowing from his knees , which required 6 stitches later , Watson hammered 80 against the best bowling line up of the IPL.#CSK pic.twitter.com/xN8DgwrX85

After 2 long days, Shane Watson came up with a tweet and video to address the CSK fans. The selfie video shows Watson thanking all the fans of CSK for the support he is getting in the past couple of days. He assures that he loves to come back the next year to take the team that one step further to win the trophy. The Australian all rounder finishes the video by saying “Whistle Podu”

Chennai Super Kings twitter handle shared the video with the caption “The most awaited video in the last 3 days is finally here! Get well soon, #WattoMan! Just can’t wait for some #yellove T20 in 2020! @ShaneRWatson33 #KNEEngaVeraLevel #WhistlePodu 🦁💛”

Comment your views on Watson’s first video after the terrific knock !!

Users of social media platforms left emotional after seeing a "gratitude" post from the social media handles of actor Vivekh who recently passed away...

JUST IN : Dhanush’s First Message To Aishwarya Rajinikanth After Divorce!!

After separating with Aishwarya Rajinikanth, actor Dhanush came up with a tweet wishing her for her music video. In his tweet, Dhanush mentioned her...