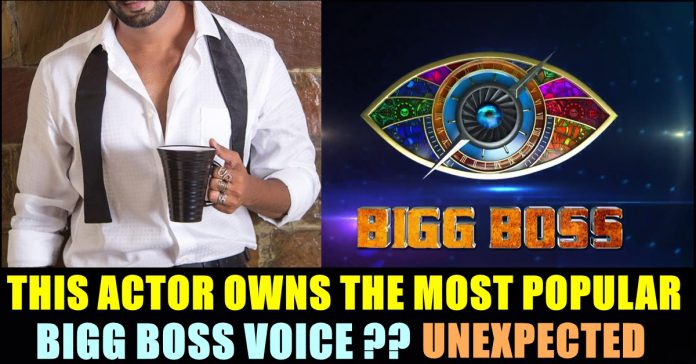 We all should have wondered who could be the person lending voice for Bigg Boss at least once in these four years. There were several speculations kept surfacing in Internet regarding who could be the person lending the voice for the Bigg Boss in the cash-rich reality game show. Initially they said that Vijay TV actor Amit Bhargav who is known for acting in a serial named “Kalyanam Mudhal Kaadhal Varai” is the one who plays the role of Bigg Boss behind the camera. However, when media approached, he completely denied it and said that he lent voice for Kannada Bigg Boss once but never worked with the management of Tamil Bigg Boss show.

Later, many people believed that “Maanada Mayilada” fame Gokulnath is the one who is providing orders to the contestants of Bigg Boss. It turned to be a mere rumour as well. Now, it has been revealed that an artist named “Sasho Satiiysh Saarathy” who is known for acting in a Bollywood film named “Manjunath” is acting as “Bigg Boss” in the Tamil version.

The fourth season of Bigg Boss, hosted by “Ulaganayagan” Kamal Haasan is currently underway. The show went past 80 days and the contestants are busy contending for the title. Bigg Boss is looking for all ways to entertain the audience by making the contestants perform interesting tasks. Meanwhile, a report has surfaced revealing the identity of the Tamil Bigg Boss.

According to Vikatan, the one who is giving orders to contestants is Sasho. He who belongs to Tamil nadu, is known for his works in Bollywood. The 2014 film “Manjunath” had Sasho Satiiyish as a protagonist. The film is based on the true story of Manjunath Shanmugam — the Indian Institute of Management Lucknow graduate who was killed in Lakhimpur, U.P.

The social media posts of Sasho suggests the same as he posted the pictures of himself posing in the sets of Bigg Boss.

As soon as the news leaked in the Internet, fans of Bigg Boss started commenting on his posts regarding the show.

Trisha Got Slammed By Producers For This Reason !!

Celebrities not attending the promotional events of their own movies has became a fashion nowadays. Actor Ajith Kumar is the prominent actor who started...

Actor Chandramouli who is known for acting in Prabhu Solomon's "Kayal", exposed a serial offender who has been spamming the posts of his wife,...