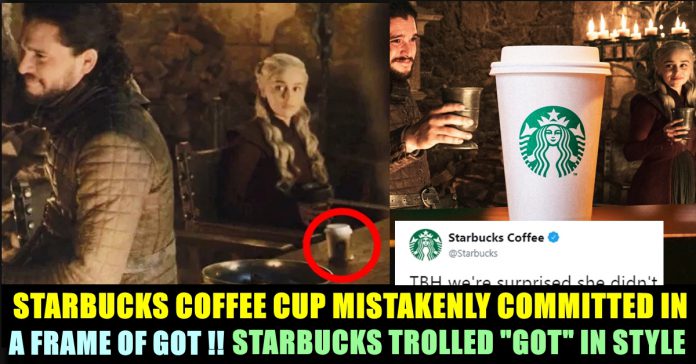 Finally Starbucks Reacts To The “Coffee Cup” Blunder In “Game Of Thrones” !! Hilarious !!

Game of Thrones season 8 episode 4 created a stir among the fans. In a particular scene during the dinner celebration held on the occasion of defeating the night king. Daenerys Targaryen being uncomfortable with Jon Snow’s popularity didn’t make the audience uncomfortable but the presence of the Starbucks coffee mug definitely did.

The misplaced cup spotted in one of the scenes stole the show like nobody’s business. After the coffee cup was spotted Game of Thrones fans lost their cool how can such a humongous production can do such a silly mistake it was supposed to be a dragon drink rather than coffee. As the coffee cup was evident on the dining table.

HBO was the first to break their silence on the gaffe as they tweeted from their official Twitter handle. Accepting the mistake, HBO had tweeted, “News from Winterfell. The latte that appeared in the episode was a mistake. #Daenerys had ordered an herbal tea.” On the other hand, in an interview with Variety, Game of Thrones art director Hauke Richter had stated, “Things can get forgotten on set. [The coffee cup gaffe has been] so blown out of proportion [because] it has not happened with [Game of] Thrones so far.”

The latte that appeared in the episode was a mistake. #Daenerys had ordered an herbal tea. pic.twitter.com/ypowxGgQRl

The American coffee company Starbucks didn’t stay behind and took advantage of this situation. Starbucks took to their twitter handle and tweeted ‘TBH we’re surprised she didn’t order a Dragon Drink.’

Well, This is one way to promote your brand with zero cost. The tweet of the Star bucks going viral and everyone having a good laugh at it.

At your local Starbucks! https://t.co/y1OlvwTzVR

Soon after the still from the show went viral, the internet couldn’t help but explode with hilarious memes. Twitterati erupted in shock, most of which comes out of disbelief as to how did the makers not notice the presence of a cup right in the frame.

Here are some of the most hilarious reactions to the new entrant in the Game of Thrones universe.

So this is where we’re at now! A Starbucks cup! #GameofThrones pic.twitter.com/dhWXyDo15w

The coffee-cup in #GoT is a reassuring reminder that even multi-million dollar Hollywood productions are no exceptions to the chaotic mess that is a shooting-spot.

Previous articleChinmayi Replied To A Meme Which Abused Her In A Very Cheap Way !!
Next article“Vijay Is Not A Good Actor” Said This Popular Villain Actor !! Fans Got Extremely Angry !!